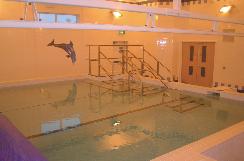 A DACHS mini-Combined Heat and Power (CHP) unit supplied and commissioned by Baxi Technologies UK, part of the Baxi Commercial Heating Division, has been installed at a newly constructed replacement primary school in Wigan. The new Hindley Primary School, constructed by Wigan Metropolitan Borough Council, NPS North West and Eric Wright Construction through a partnered project, has been designed to be highly sustainable and environmentally friendly, incorporating other green initiatives in addition to CHP including rainwater harvesting and natural ventilation.

The UK Government’s Energy White Paper emphasised that local authorities have a fundamental role to play in reducing greenhouse gas emissions – in particular carbon dioxide, which is thought to be the principal cause of climate change. Therefore many local authorities are investing in alternative, low carbon technologies such as mini-CHP as a means to achieving their emission reduction targets.

CHP is an extremely efficient way of generating electricity and producing heat simultaneously at the point of use from a single fuel. This fuel could be natural gas, LPG, oil or some form of bio-fuel. CHP offers an economic and environmentally friendly alternative for meeting thermal and electrical demands in many applications. The electricity generated by the CHP unit displaces electricity that would normally be imported from the grid with the thermal output reducing the amount of fuel used by other heating appliances at the property – in doing so the demand on primary energy can be reduced by up to 30%. In large conventional centralised electricity plants the heat produced in the generation process is normally directed into cooling towers, discharged to the atmosphere and wasted, leading to low overall plant efficiencies.

Providing 12.5kWth of heat output and 5.5kWe of three-phase electricity, the natural gas fuelled DACHS delivers an overall fuel efficiency of around 79% (Gross Calorific Value), which can be increased in certain applications to approximately 92% through the use of an exhaust condenser. The key to the economic and environmental benefits is the electricity generated by the CHP unit – it is the higher value commodity when compared with gas and has a higher carbon emission factor. When operating for approximately 6,000 hours per year the natural gas fuelled DACHS can reduce carbon dioxide emissions by around five tonnes per annum. This equates to around a 20% reduction in emissions when compared with the current mix of centralised power generation in the UK and gas fired heat only boiler plant.

To maximise the annual running hours of the DACHS unit, and thereby maximising the economic and environmental benefit of the CHP installation, there must be an all year round requirement for heat sufficient to support the thermal output – the DACHS (as with all engine based CHP technologies) is a heat lead device and the return water from the property is used to cool internal components of the unit. The inclusion of a hydrotherapy pool at Hindley Primary School increases the base thermal load of the property and offers an ideal use for the heat output of the DACHS unit.

“We calculated that the thermal and electrical profiles for Hindley Primary School’s hydrotherapy pool were perfect for CHP, so we were keen to include this technology in addition to rainwater harvesting and natural ventilation. However, when we started to investigate CHP products currently on the market, we found that many were actually too large in terms of their output to be suitable for the size of the pool. Fortunately, the DACHS mini-CHP unit from Baxi Technologies UK, with its relatively low outputs, was ideal. The company assisted with our designs, and provided guidance to ensure optimum integration of the DACHS.

“Hindley Primary School is an excellent example of how CHP can be used effectively in the education sector. During the design phase, we were interviewed by the Department for Education and Skills and the Building Research Establishment (BRE) – and Hindley primary is actually one of the first pilot projects for the new BRE Environmental Assessment Method (BREEAM) for schools.”