Why demand for the beam is gathering steam 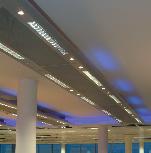 Chilled beams have a bright future in the air conditioning sector, according to Terry Farthing, Sales Director of Trox (UK).
Although chilled beams have been around for a long time (the first models were developed in the 1960s), they have struggled to capture the imagination of many consultants. However, with a raft of recent legislation related to energy saving and new chilled technologies being developed, I believe this is about to change.

The efficiency of active chilled beams is largely determined by the amount of air volume required to drive the beam engine, in other words, to make the system work. By increasing the efficiency of the induction, it is possible to reduce the volume of air used, cutting the system’s energy consumption significantly.

Part L of the Building Regulations places severe limits on the amount of air that can be pumped around a building. This has been a significant driver to the search for ways of increasing induction.

Trox will shortly be unveiling a product that uses half the air volume of its predecessor, but maintaining the same output. The new development has already been used successfully on a massive UK project and we will be releasing more details soon.

In the meantime, I believe we are on the cusp of a massive swing from fan coil units to chilled beams.

One of the drivers for this again relates to Part L and its demands concerning energy consumption. Chilled beams do not require a secondary fan so they are inherently more energy efficient than fan coil units. On top of this, they use higher chilled water flow temperatures than fan coil units (around 17°C), which means there is a significant part of the year when chillers do not need to be working and free cooling is available.

But energy consumption is not the only advantage of chilled beams. Whole life costs are lower than fan coil units; they contain no moving parts and are therefore more reliable and less noisy. They are also maintenance free, have a long life and integration within a building is far easier because the consultant is presented with a complete system.

The advantages can be multiplied still further by using multi-service chilled beams (MSCBs). MSCBs offer an alternative to suspended ceilings. They provide economic cooling, and a variety of other services including:

MSCBs enable the architect to style the appearance of the building services for the first time. They also have several other significant benefits including:

• The beams accommodate office ‘churn’, and integrate with future partitioning and layout requirements.

• They are ideal for new-build and recycled 1960s buildings alike.

• The beams allow natural thermal cooling from the exposed mass of the concrete ceiling soffit.

• Because the beams are plug and play, they reduce commissioning times and costs.

If, as I envisage, the market does swing in favour of chilled beams then it crucial that we, as a manufacturer, are ready. This means reviewing production capacity and this is precisely what we have done. Indeed, we have gone further – we are significantly expanding our chilled beam production line and looking at possibly relocating locally to a dedicated chilled beam facility.

That is a mark of how much faith we have in the future of the chilled beam in all its forms.

A peek over the horizon

I predict an increasing emphasis on providing a complete service for chilled beams – design, manufacture and installation. Now that we have opened our service division, for example, we are finding that more consultants prefer us to take complete responsibility for the design, manufacture and installation because they have single point responsibility – they are only dealing with one person, which makes the operation simpler and smoother running.

The contracting process is undergoing far reaching changes. It is time consuming to ask three or four manufacturers to tender. I believe pressure is mounting to ensure that the selection process is such that one supplier can be chosen at an early stage. This is absolutely essential to ensure that the manufacturer can truly become part of the collaborative design process. Of course, pre-selection will include commercial and technical assessments and an element of budget costing, but after that, one manufacturer needs to be selected. In our experience, where this has happened the project has inevitably been delivered on time and to budget.

Chilled beams will become truly multi-service with the inclusion of wireless technology to replace complex cabling.

In future, chilled beams will probably use a cooling medium other than water, for example CO2, to reduce the length and costs of the beams and increase their outputs.

• Lower maintenance. Chilled beams have no filters to change and there are no moving parts, filters or fans, which minimises the impact of the system on the user of the space.

• Because the height of the building can be lower with exposed multi-service chilled beams, they reduce construction costs or allow additional floors to be constructed.

• Production, not construction – beams are prefabricated in the factory, leading to a shorter production cycle and fewer trades on site. This also improves quality and safety.

• Lower floor to slab height – making them ideal for recycling 1960s buildings as well as allowing the construction of extra floors in new build applications.