Why are my electricity costs increasing?

Wholesale power prices have been volatile in recent years however they are currently at levels similar to 2013 as the below graph represents. WHY therefore are commercial customers seeing an increase in electricity costs on the bill? Joes Warren, co-founder of ZTP, a strategic energy management consultancy, explains.

Within the makeup of a standard electricity invoice, the pence per kWh price, is made up of both the wholesale cost and non-commodity cost. It is actually less than 50% of the price that is directly a result of the wholesale costs of power.

So What Goes Into The “Non-Commodity Costs”?

Broadly the costs can be separated into levies and costs incurred by the running and management of the national grid.

The below table lists all current charges considered as “non-commodity” that would make up circa 66% of the costs of electricity for a normal business consumer. There is also a new cost imminent associated with the recovery of “EII” – Energy Intensive Industry exemption. To alleviate some of the costs incurred by extremely large energy consumers, they will be given exemption of certain levies within their electricity invoice. The remainder of businesses nationwide that would not qualify for these exemptions will in turn pick up the difference. 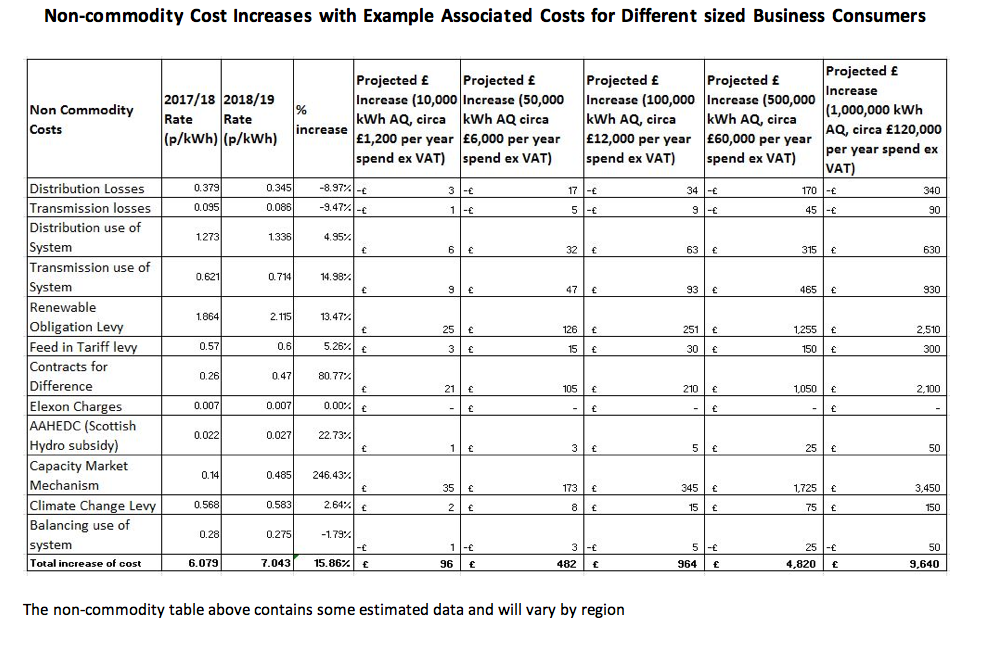 Which Costs Have The Biggest Impact?

Focus On DUoS – Distribution Use Of System

DUoS is a charge that pays for the physical distribution of electricity across the grid into businesses. This is due to increase by nearly 5% from 2018/19 however as this is a relatively large segment of the cost make up, the monetary value is significant.

DUoS is also charged via certain time bands to help manage demand on the grid. “Red” being the most expensive time, “Amber” in the middle and “Green” during off peak hours. As of 01/04/2018, the level charged during red times will be reduced, thus bringing the costs up to consume electricity during amber and green hours. This will reduce costs for those consumers that use electricity during peak hours, however increase costs for those that use energy during off peak, such as the leisure industry during the night.

Focus on TUoS – Transmission use of System

TUoS is a cost associated for moving electricity from the power stations to the distribution network. As the sources of power in this country become more complex, the costs to carry out this service are increasing. In 2018/19 that will increase by nearly 15% which for a business spending circa £1,000 per month it will equate to roughly £8 extra on their electricity bills.

This levy is designed to enable increased investment in large scale renewable projects. It will increase by 13.47% over the year resulting in an increase of over £2,500 for a business premises spending roughly £120,000 per annum on the electricity.

Focus on CfD – Contracts for Difference

A recent addition to non-commodity costs – this allows for a guaranteed price for the production of electricity to be offered to generators of low carbon energy. For example if a new nuclear power plant has been guaranteed a price of £60 per mWh they produce but the wholesale selling price is currently £50, they would receive an extra £10 per mWh funded by this charge.

This is due to jump by a dramatic 80.77% thus marking a large increase to consumers’ invoices.

The largest increase and largest individual non commodity cost is designed to ensure there is sufficient and reliable capacity on the grid, thus ensuring “the lights stay on”. This sharp increase equating to over £200 of a £12,000 yearly invoice should ensure there is money to invest in new generation and keep exiting generators on line.

What Would it Take for Costs to Start Falling?

On the non-commodity side, it would need a major shift in policy away from renewable sourced energy and far more security of supply to ensure there are no issues with demand on the grid. It is therefore extremely unlikely that this part of the cost make up will reduce.

As can be seen by the below graph – the biggest shift in the past 16 years has been from coal fired power stations to renewable sources (mainly solar and wind).

Regarding the wholesale costs that make up the remaining 44% of costs, it is impossible to predict the future, however to neutralise the costs of non-commodity increasing, the wholesale price would need to reduce from current levels by over 20%. This is extremely unlikely so it would seem that all “normal” business consumers will see their prices increase.

It is therefore vital that with energy prices increasing, consumers do everything possible to reduce consumption and ensure electricity contracts are tendered to the full market to ensure best value. It is also important to ensure the individual meter consumption “shapes” are reflected on these tenders – particularly with a view to the change in DUoS charges mentioned in this article. By comparing prices accurately based on relevant consumption – the best possible rates can be applied to mitigate the increases over the coming years.

Joe Warren is a co-founder of ZTP, a strategic energy management consultancy that works with businesses and other organisations with multi-site operations to help them manage their energy and procurement requirements more efficiently and cost-effectively.  ZTP’s solutions (including procurement, billing management, finance support and reporting, metering and delivering projects to reduce energy consumption) help to save time and make a positive impact to the bottom line.