Water heater proves its worth 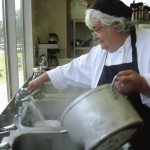 Live trials of Mitsubishi Electric’s unique PWFY water heating system have proved that it is far more cost-effective and produces far less CO2 emissions than traditional methods with demonstrated savings of 78% in both running costs and emissions over the previous system.

The trials show that the unit, which is able to use excess heat recovered from a VRF air conditioning system, costs less than a quarter of the running costs than the previous gas boiler system and about half as much as a modern gas condensing boiler system.

The PWFY water heating system has been on trial at the Hatfield headquarters of the air conditioning manufacturer since early September 2008 and has been supplying all of the hot water required by the three-storey building’s busy kitchen.  The building houses many different divisions within the company and accommodates approximately 300 members of staff.  The office has an on-site restaurant that can seat 100 people and serves cooked meals five days a week as well as breakfast every morning.

“The restaurant is very popular with employees so the kitchen staff are constantly busy preparing and serving meals from early morning until mid- afternoon,” explained Philip Ord, product marketing manager. “The kitchen area therefore needs constant cooling during these times and a good supply of hot water for all of the washing up and cooking needs.

“The restaurant previously used an air conditioning system for cooling and a commercial gas boiler to provide hot water. However you look at it, this is a busy kitchen needing a regular supply of hot water and the PWFY has surpassed expectations and delivered measurable reductions in cost,” added Ord.

The trials show that the PWFY and the new air conditioning system that it runs alongside, would average out at annual running costs of around £517, producing 2,222kg of CO2.   The previous system is estimated to have cost £2,367 to run on an annual basis at today’s prices and would produce 10,176kg of CO2 in a year.

When compared to a modern gas boiler for water heating and a split system air conditioner for cooling (with a COP of 3.5) it was calculated that the annual running cost of the total system would be approximately £1,114 and would produce 5,020kg of CO2.  Using the PWFY system instead of the modern equivalent leads to a 54% reduction in running costs per year as well as a 56% reduction in the amount of CO2 produced annually.

“It is clear from the data obtained in this case study that the PWFY is a highly efficient way of providing a hot water supply to commercial buildings and more so when used in conjunction with a heat recovery VRF air conditioning system,” explained Ord.  “Not only can companies save on running costs, which is good news in these tough times, but they can also reduce the impact of their operations on the environment.”