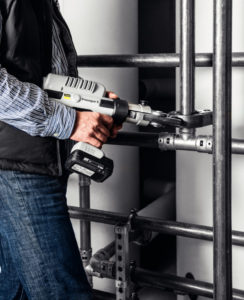 The £6.5 million development of the Rockvilla centre will be the headquarters of the National Theatre Scotland (NTS), allowing the theatre group for the first time to have its rehearsal and production activities under one roof. The building will consist of three rehearsal rooms, creative development spaces, a learning and community suite, production workshop, technical store, office space, meeting and social areas.

The Rockvilla centre required the installation of a new heating system within the 3,700 square metre space. For such a complex site, Atelier Ten required a solution that was reliable and would help to reduce installation time. Having seen the Viega Megapress system used on another project, the team from Atelier Ten were impressed by its quality and reliability and as such selected the system for use at the development of the Rockvilla centre. 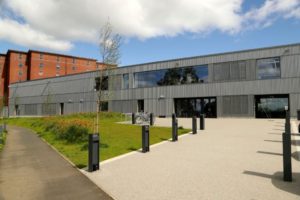 Installed by Moffat Mechanical in just five months, the system saves up to 60% of assembly time compared to traditional tube connection methods such as welding or threading – both of which can affect the integrity of the tube wall. The Megapress system also provides a clean connection due to its pressing function, meaning there is no excess cutting oil, metal swarf, hemp residue or jointing compound that would be used with traditional methods. Therefore valuable time was saved as the system did not require flushing to remove any residual installation debris.

William Giplin, Mechanical Project Engineer at Moffat Mechanical commented on the installation: “Having worked with the system before, we knew just how easy the Megapress would be to use. Using a single press gun, the connections can be achieved in the most confined spaces – completing a full seal in a single press. With the large Rockvilla site and over 500 connections of thick walled steel tube to be made, this was crucial. We are so impressed with the Megapress system that we are continuing to use it on other sites.”

David Cameron, Associate Director at Atelier Ten concluded, “Due to the complexity of the heating system installed at the Rockvilla centre, and with the inclusion of a biomass boiler, we wanted to use a tubing system that was quick to install and provided no additional hazards. Thanks to its cold press application the Megapress achieved just this.”

With more then 200 different engineered connection configurations, Viega’s Megapress system has an improved corrosion resistance over light carbon systems due to the Megapress’ greater wall thickness that ensures the connections last a minimum of 25 years.

Furthermore, Viega’s Megapress connections utilise ground-breaking SC-Contur technology, which is proven to deliver a 100% positive leak if the fitting is inadvertently unpressed making it easily identifiable during pressure testing. This not only makes new installations easier and safer but also reduces the length of time a system must be shutdown for maintenance in the future.

For further information on Viega’s range of solutions, visit www.viega.co.uk