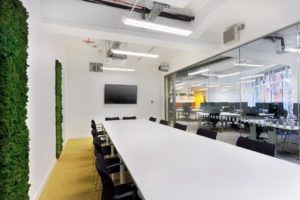 Pictured: Vent-Axia’s Lo-Carbon T-Series fans in one of the meeting rooms at the UK Green Building Council’s refurbished London HQ.

Vent-Axia has supplied its Lo-Carbon T-Series fan as part of a new office fit-out for the UK Green Building Council’s London HQ.

The Lo-Carbon T-Series was installed in windows and a partition wall and was selected as UK-GBC wanted CO2 control for occupancy comfort.

“We are delighted to be part of this landmark project and for our Lo-Carbon T-Series to have contributed towards achieving such an impressively low embodied carbon footprint,” said David Cook, Product Marketing Manager – Non-Residential at Vent-Axia.

“It’s 30 years since we first launched the T-Series and it has become the UK’s favourite commercial fan. Known for its robustness and reliability, the T-series’ high quality design has stood the test of time and has evolved with new and improved motors, impellers and grilles.”