Turn on the smart solution 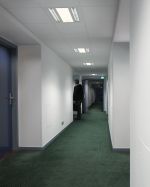 The price of electricity has risen by 50% in the last five years, speeding up the drive towards energy efficiency. Turning off the lights when they are not needed is just one way to achieve those savings as David Trueblood, Managing Director of Riegens Lighting explains.

Turning on the lights when they are needed and turning them off when they are not….it sounds very straightforward and certainly very easy to achieve. Unfortunately in most commercial buildings this isn’t the case. Turning the lights on is easy but getting the last person out of the door to turn them off seems to be unachievable.

Thousands of pounds are wasted every year on lighting unoccupied buildings, and that is something which the government is addressing in the revisions to Part L when they are introduced in 2013.

The government has made no secret of the fact that they are going to tighten up regulations with regards to wasting energy. The release of the consultation on the 2013 Building Regulations outlines their plans for efficient lighting in non-domestic buildings – and it looks like there will be big changes.

There are now two basic options, one which is a more conventional solution based on luminaire efficacy (with or without controls) and one option which uses Leni (the Lighting Energy Numerical Indicator).

Perhaps the major change is that in previous versions of Part L the measurement has been based on lumen efficacy which basically meant that it didn’t matter how inefficient your luminaire was as long as the lamp was efficient. This has now gone and in its place we now have luminaire efficacy which is a massive step forward and means that every manufacturer will now have to deliver efficient luminaires.

One of the other major changes to Part L 2013 will be in the way we address control strategies and this is certainly good news because it is evidence that progress is being made. Occupancy and daylight controls are no longer the only deliverable and measured controls and the controls package can deliver up to a 30% reduction on the original luminaire.

So far so good – the changes which we can expect to see next year are certainly a step in the right direction, and in ensuring that the lights are only switched on when they need to be. So what effect will Leni have?

Leni basically measures the predicted energy in use, so not how efficient a luminaire is, rather how much energy it will use when it is actually switched on. It embraces daylight, occupancy, operating hours and the controls package and through the use of a fairly complicated equation, comes up with a calculation which is far more accurate than simply measuring the efficiency of the luminaire.

As far as changes go I think that the proposed revisions to Part L are definitely a step in the right direction and will certainly go some way to achieving the savings and efficiencies that need to be made.

The way I see it, this is an opportunity for everyone to combine better lighting comfort with energy savings and as a result reduce operational cost. Many of our standard ranges for example are now available with dimmable control gear as standard. There is also a vast range of control systems available to control everything from one room to a large commercial building. Daylight linking also gives you an opportunity to make use of the contribution of natural light into a building, allowing luminaires to be dimmed which provides further energy savings.

As you can see there are a number of options available which will still allow you to meet the stricter requirements of Part L 2013, and it doesn’t need to be a difficult task.

What most people want is a simple solution which meets all of the guidelines and regulations and essentially just turns the lights on and off when they are needed. It sounds very straightforward but it is this type of approach which led to the launch of our ECOWave range.

ECOWave is so simple that you almost expect there to be a problem with it – I can assure you that there isn’t and that it does meet every requirement for energy saving. It is basically a range of luminaires which is equipped with integrated daylight and motion sensors which keeps lights dimmed or switched off when they are not required.

As I said – it’s all fairly simple, but it’s also very efficient. ECOWave is a dynamic, fully automatic lighting system which is based on a microwave sensor. It turns on the light only when the surrounding daylight is below the pre-set threshold or when human activity is detected. It then turns off or dims the lighting to a lower level after the person has left the detected area.

As far as applications go it is wide ranging. The obvious one would be offices where it would take away the need for someone to switch off the lights and ensure that areas which are seldom used are not wasting energy.

Another perfect application would be hotel corridors because once again this is an area which doesn’t need to be lit all of the time. There is a wide range of motion sensors available covering various output functions, detection area, hold time and daylight threshold and as a result you can tailor the system to suit the individual requirements of each application.

The proposed changes to Part L are a huge step forward and they will undoubtedly have some people trembling in their boots at the new legislation which needs to be met. But that shouldn’t be the case because the point which many people are missing is that we ought to be making savings as a matter of course and not just because the government is telling us to.

Ten years ago it was a totally different story because energy efficient products were generally very expensive and not particularly aesthetically pleasing. Thankfully both of these things have now changed and huge savings can be made. Our ECOWave range for example has a wide range of (attractive) luminaires to suit every application and the overall savings achievable can be anything up to 85%.

So I think that the main message is clear. Yes there are changes afoot in Part L 2013 and we will be required to make further savings as a result of this – but we shouldn’t lose sight of the obvious facts. We need to make savings anyway, regardless of new legislation and there are products on the market which allow us to do that – quite simple really!