Try it for size

Combined heat and power (CHP) has been proven for its effectiveness in reducing carbon emissions, thanks to the efficient way the technology simultaneously derives power and heat from the combustion process. However, as Julian Packer from Dalkia explains, it is only through specifying and designing the plant accurately that the correct load and therefore desired savings can be realised. 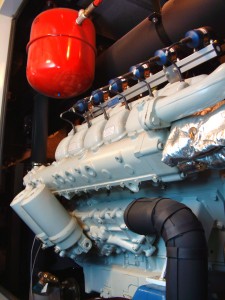 They are often regarded as a golden bullet when it comes to reducing energy cost and improving carbon savings – particularly for older commercial buildings, hospitals and universities. This is because CHP plants make more efficient use of the primary fuel source than separate conventional measures. It means that, with the right balance of technical and financial conditions, CHP can deliver significant environmental benefits and cost savings in the region of 20-30%. In addition, when the plant is accredited under the CHP Quality Assurance Programme, there are other financial incentives that can reduce tax liabilities.

Environmental performance is enhanced too because the primary fuel consumption per unit of energy generated is lower, high greenhouse gas fuels can be replaced with cleaner options and the electrical losses in transmission are reduced thanks to the onsite nature of power production.

However, once operational the failure of these anticipated financial and environmental efficiencies to transpire can be the source of frustration.

Key to overcoming this disjoint is both a true understanding of the technology and the correct specification – in particular the sizing – of the plant. This will help to ensure both its heat and power loads meet the energy demand of the building for which it is intended. It must also be remembered that the selection of a CHP plant offering maximum energy efficiency is not always the solution that will return the greatest financial saving.

An expert CHP provider will be able to audit the building and its heat and electricity demands to first establish the feasibility of a CHP plant and then to determine its financial viability. It can then specify the optimum sized plant for the site’s requirements, based on a heat to power ratio. The efficiency of a site is important in this assessment. Current energy demands and any future planned or foreseen changes should be taken into account.

Initial CHP selection is influenced by a duality of factors: that there is an adequate heat demand across the site, which will be met using the heat produced by the CHP, and the base-load electrical demand at the site. Since CHP produces heat and power simultaneously it is essential that the extent to which the site has concurrent heat and power demands is considered. While some sites have defined, regular working patterns, the energy and heat use of others can be defined by fluctuations such as downtime – overnight and at weekends.

Space heating should also be considered within the initial assessment. Where sites require large amounts of heat – not for hot water, swimming pools or manufacturing, but for space heating – the demand is likely to vary significantly between winter and summer months, not to mention variations in occupancy levels.

Specifying and sizing the CHP plant based on the heat demand will maximise energy and environmental savings. Typically a site needs 4,500 hours of high constant heat demand per year to make a CHP economical. It must also be taken into account that, even where there is less demand for heat, but a high demand for cooling, a CHP could be the most relevant solution. Depending on the heat to power ratio of site energy demands, sizing to meet the heat requirements will potentially result in a power load surplus to the site’s requirements. If this is the case then a contingency needs to be considered to ensure electricity can be exported to the grid effectively – becoming a key issue in sizing a CHP economically.

For these reasons, CHP technology is most prevalent across industrial, public and commercial sectors in the UK. Without careful assessment, smaller CHPs are likely to find the economics don’t stack up when it comes to exporting their surplus power. On the other hand, larger schemes can benefit from this additional revenue stream, especially where it is exempt from the Climate Change Levy.

Having determined the electrical output of the CHP plant it is possible to compare the recoverable heat potential with the site’s overall heat demand. This needs to take into account the temperature and form in which heat can be recovered.

In cases where the electrical demand is met but there is a surplus of recoverable heat, a smaller system should be considered. On the other hand if all the recovered heat from the plant can be used but electrical demand is not met, a larger unit may be suitable. For the CHP plant to be most effective all of the recoverable heat needs to be used across the site and therefore there needs to be adequate demand for heat in order to make the CHP most cost and carbon effective. This can result in a surplus of electricity during quieter periods, so a contingency for exporting energy to the grid must also be in place.

For this there are a number of factors to be accounted for. The quality of electricity to be exported, who the customer will be, the price agreed, the times that export will take place and any up-front costs based on the distribution network operator and local electricity network should all be considered.

Financial assessment of any proposed CHP plant is vital and a CHP expert can provide insight on the optimum sizing according to demand, available savings and any perceived market changes. Cost savings need to be calculated for production and non-production, operational and non-operational times. Initially the site’s base-load energy demands and non-CHP costs in addition to the required heat to power ratio are determined. Next the cost of meeting these energy demands via a CHP solution are calculated. Finally a cost estimate for operation and maintenance of the plant needs to be included. This is deducted from the energy cost savings to provide the potential net annual cost saving.

Of course, the operational costs will vary according to the hours of operation. Finally the initial feasibility study should compare an assessment of the overall cost savings with estimated capital costs for plant installation, calculating the payback term. The payback period will help identify a project’s viability. It should also provide a benchmark for similar investment initiatives and in so doing put different plant options in order of financial merit.

Combined heat and power has the potential to deliver efficiencies and savings to both large scale and smaller sites. Yet the viability of a CHP and the feasibility of its financial and environmental returns need to be scrupulously understood and fully assessed to ensure firstly it is the right technology for the site and secondly that it is specified accurately to deliver the savings projected.