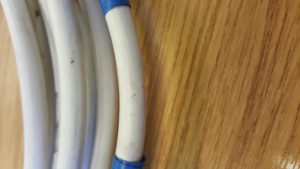 The cables, which failed the British and European Standards flex test, were found on sale following random market place sampling by the ACI. The Initiative has recently stepped up surveillance following an increase in reporting of substandard cable.

In a written notification, LTC outlined that the incident, which the ACI originally reported in November last year, may be attributed to the ‘running-in’ phase of a new production plant in Moldova at the end of 2016 and into early 2017.

Since the ACI’s original announcement, certification body IMQ has indicated that it has been addressing issues identified during routine surveillance work with the Triveneta factory in question. These issues were being dealt with in accordance with the HAR scheme rules and IMQ requirements.

The company has also confirmed it is working with IMQ and that during the latest inspections at its production site by IMQ no problems or anomalies were detected. BASEC also reported that testing of a further batch of cable passed relevant tests.

In September last year tests of cable samples were commissioned by the ACI and carried out by three independent sources. All showed similar results. Other non-conforming results were also noted but the exposed copper conductors were deemed to be, by far, the most dangerous failing of the tested cable.

The affected 3 core 1.5sq.mm cords could potentially be fitted to vaccuum cleaners, electric drills and extension leads, all of which are exposed to constant flexing during their everyday use.  The ACI believes the copper conductor strands which penetrated the PVC insulation and sheathing during the test could cause serious electric shock or even death if they come into contact with a user.

The samples of Triveneta flexibles cords which were tested were marked with the manufacturer’s identification ‘La Triveneta Cavi’ and carried a 2016 manufacturing date, they were also marked with the IEMMEQU <HAR> approval mark. The failed flexible cords were orange and white in colour, however the ACI advises that all colours should be treated with great caution.