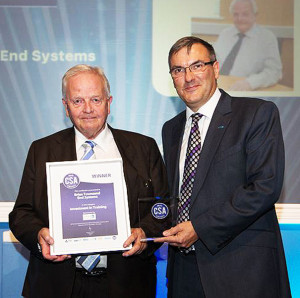 Brian Townsend, a past president of the Building & Engineering Services Association (B&ES), has been honoured in the first ever industry awards scheme organised by the Commissioning Specialists’ Association (CSA).

He received the Investment in Training Award as a result of nominations from six separate members of staff at his company, End Systems, which is a founder member of the CSA.

Mr Townsend, who served as B&ES (then HVCA) president in 2003/4, was commended for encouraging all his engineers to undertake the CSA’s distance-learning modules.  He also provides recruits with good GCSE grades the opportunity to study for Ordinary and Higher National Certificates in building services.

One of his proposers praised Mr Townsend – who confirmed that he was “overwhelmed and delighted” at the recognition – for “taking training seriously” and for his belief in “improving the professionalism of his employees”.

End Systems – which Mr Townsend established in Leigh, Lancashire in 1976 – also secured the Student of the Year category in the person of Robert Cleworth, who was praised by the judges for completing three distance-learning courses with merit.

The CSA Awards were launched to mark the 25th anniversary of the foundation of the organisation, of which Mr Townsend served as chairman from 1993 to 1995.