Commenting on SHRM-e, the judges said: “It sets a new industry standard for energy efficiency and continuous heating performance. It builds on the success of the multi-award-winning SMMS-e system, delivering improvements across the board in terms of energy efficiency, occupant comfort and breadth of building application.

The judges conclude: “Toshiba’s SHRM-e represents a leap forward for heat recovery VRF technology, and that’s why it is a worthy winner.” 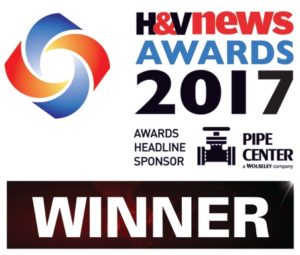 SHRM-e is Toshiba’s latest and most advanced heat recovery VRF system to date. It embodies important technical developments that break new ground for the industry in terms of compressors, controls, and wireless communications, which extend efficiency and the application envelope for VRF into new territory.

A battery of incremental improvements combine to ensure the system achieves an ESEER (European Seasonal Energy Efficiency Ratio) of 8 and above in most capacities, an industry first, and an ESEER exceeding 7 for all capacities, a previous industry first by Toshiba, achieved by SMMS-e.

David Dunn, director and general manager of Toshiba Air Conditioning and CIAT Ozonair, said: “We are delighted that the innovation and technical excellence underpinning SHRM-e has been recognised by this independent panel of industry judges. It confirms and supports our own belief in the product as establishing a new frontier in the field of VRF air conditioning technology.”

He added: “Few sectors are as competitive as the VRF market, particularly in the UK, where buyers are very knowledgeable and familiar with the technology. We went to great lengths to address UK needs in refining SHRMe, and this has paid off by delivering a system that outperforms the competition on every key measure. We believe it will be another winner for Toshiba.”