Six months after launching the industry’s first seven-year ‘Total Peace of Mind’ warranty to Accredited Installers, Toshiba Air Conditioning (a division of Toshiba Carrier UK Limited) has announced it is expanding the ‘Total Peace of Mind’ scheme to include Qualified installers during 2014. 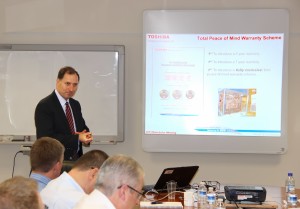 This gives five years full cover at the new enhanced level, and opens up the scheme to many more companies.

David Dunn, General Manager of Toshiba Air Conditioning, said: “We have had an enthusiastic response to our pioneering warranty. Accredited installers really appreciate the assurance it provides. We now want to extend the ‘Total Peace of Mind’ offer to Qualified installers so that they too can apply and benefit from the upgraded warranty.”

Under the previous standard scheme, in the unlikely event of a component such as a PCB failing, the installer would receive a new PCB plus £28.00 towards labour costs.

Under the new enhanced scheme, Toshiba would supply a new PCB and £175.00 labour costs to the Qualified installer, a realistic reflection of the actual cost of sending an engineer to carry out the works.