Jordan Bancroft, 23, has been recognised as one of the country’s leading electrotechnical and engineering services apprentices, after winning the coveted 2017 ‘ECA Edmundson Apprentice of the Year Award’ during an awards ceremony held yesterday (Wednesday 20 September) in London. 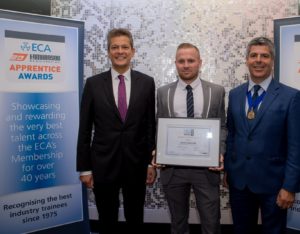 Jordan, who works for ECA member-firm Imtech Engineering Services in Nottingham, was trained by leading provider JTL. After overcoming fierce competition from the other finalists, Jordan has won top prizes including £1,500, and a study tour to Limoges, France, sponsored by top manufacturer Legrand.

During the judging process, the panel of industry experts said they believed Jordan would make an excellent ambassador for the ECA and industry over the next 12 months.

Jordan Bancroft said: “It’s an absolute honour for me to be recognised as ECA Edmundson Apprentice of the Year and to become an industry ambassador. The training and practical experience I have received from Imtech and JTL has been first class and it’s a privilege to represent both organisations.”

The three runners-up, who each won £750 and a state-of-the-art toolkit, are as follows:

ECA CEO Steve Bratt commented: “Many congratulations to Jordan Bancroft for deservedly winning this year’s ECA Edmundson Apprentice of the Year Award. The quality of the four finalists is a real indication of the talent that exists in our industry.

“Imtech Engineering Services and JTL deserve much credit for their efforts in developing Jordan during his apprenticeship. Congratulations also to David Pearce Electrical Contractors, NRT Building Services, and Playfords Ltd for supporting high quality training within our sector.”

Edmundson Electrical Managing Director Mark Felber added: “Edmundson is delighted to have sponsored the industry-leading ECA Edmundson Apprentice of the Year Award for the last 43 years. We have a long established policy of developing young people within our sector through both our apprenticeship and graduate schemes.

“Many congratulations to Jordan and the other three finalists for making such an impressive start to their careers – and of course for reaching this stage of the ECA Edmundson Apprentice of the Year Award.”

Jordan now works for Imtech as a trainee engineer, and has also been studying for a BTEC in Building Services. He was part of the Imtech team working on the Olympic Stadium Transformation Project, which converted the stadium into a multi-use sporting venue, including becoming the home of West Ham United FC.

The 43rd ECA Edmundson Apprentice of the Year Award ceremony, held at Kensington Roof Gardens, London was attended by a host of leading figures from across the electrotechnical industry.

Edmundson serve the country from over 300 locations, each carrying a comprehensive stock and run by friendly, experienced and highly motivated staff.