There is no chance of missing this 25th anniversary

Lanes Group plc is celebrating its first quarter of a century of unblocking Britain’s sewers by sending out two specially liveried new jet vac tankers onto the nation’s roads.

Dodgy drains and sewers can be a problem that gets hidden beneath our feet, but there is no chance of these advanced drain cleaning vehicles ever being missed.

The first of the two powerful JHL FlexLine jet vac tankers, complete with the 25th anniversary livery in Lanes’ eye-catching bright pink colouring, is going to the Lanes depot in Preston.

Michelle Ringland, Lanes Head of Marketing, said: “2017 has marked our 25th year in business, so we wanted to celebrate in a way that brings a bit of brightness into people’s lives.”

Lanes Preston Operations Manager Simon Nickalls has worked at Lanes for 13 years, joining as an HGV driver. He said: “Lanes has grown and developed massively, and it’s helped me grow my career at the same time.

“By my reckoning, there’s a big percentage of drainage professionals who’ve worked at Lanes during their career, and benefited from the skills learned from the business.

“That’s why I’m proud that we’ve been chosen to get one of the 25th anniversary vehicles. It’s going to help us continue to deliver great service to our customers, and raise our profile across Lancashire. You can’t miss a big pink jetting machine!”

The second anniversary jet tanker will be delivered to the Lanes East London depot at Rainham, Essex, in the New Year.

Allan Earnshaw bought Lanes for Drains from John Lane in 1992. It had one depot, Leeds, West Yorkshire, and 15 employees.

Now, Lanes Group – still family-owned – operates more than 30 depots in the UK and Ireland, along with eight utility hubs, employs more than 2,000 people, and has a turnover approaching £200-million.

In recent years, Lanes has won multiple national awards for innovation, safety, and service excellence. During 2017, it retained its RoSPA Gold Medal for occupational health and safety, won two Construction News Awards, and a UKSTT Award for no dig excellence. 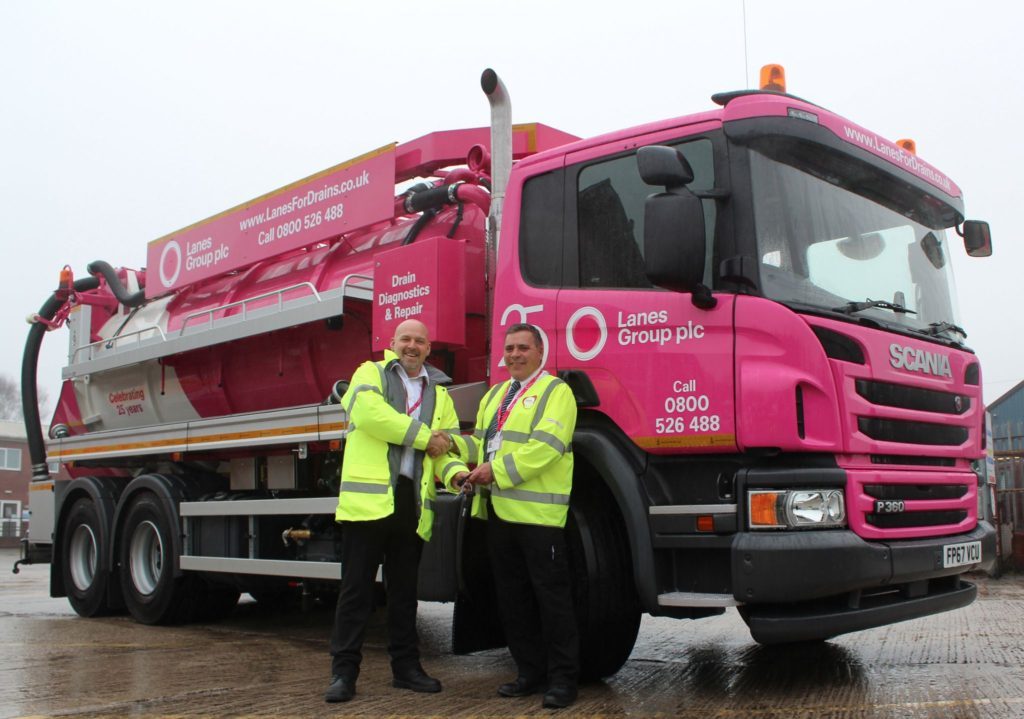