‘We must ensure that the homes and buildings we work and live in positively contribute to our physical and mental health instead of diminishing it.’

This quote opens the recent White Paper (Building our Future – Laying the Foundations for Healthy Homes and Buildings) that lays bare the inadequacies within the UK’s commercial and residential buildings.

Let’s take a look at exactly how the poor quality indoor spaces we inhabit in the UK impact on our health, well-being and life expectancy.

It’s critical to do so because we spend up to 90% of our lives inside these environments.

In the last seven years our population has grown by 3.2 million to rise above the 66 million mark. Yet, during the same time period, there have only been one million new homes built.

Which, at best, assumes the quality of our existing housing stock is fit for purpose.

But this patently isn’t the case:

– One-third of all homes being rented fail to meet the Decent Home Standard [1].

– It is estimated that one in three people in the UK live in poor quality housing.

– Only 7% of English homes meet the most basic accessibility standard.

– There are more than half a million overcrowded households in England, affecting one child in ten. 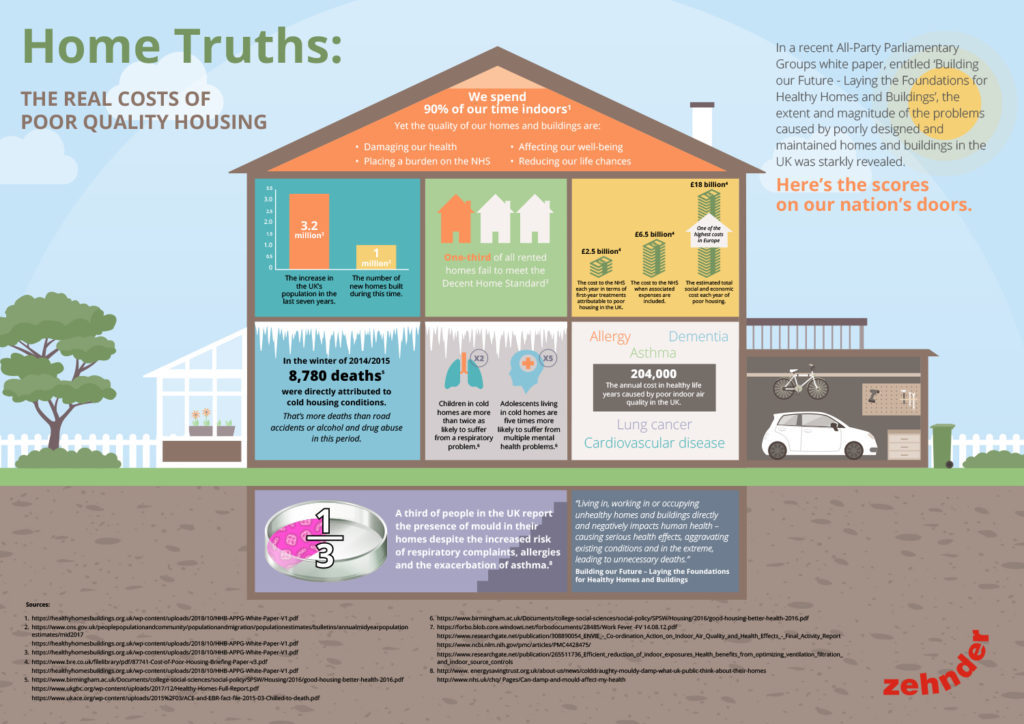 What are the effects of this ‘broken’ market?

The winter of 2014/15 was particularly cold: it is estimated to have caused 43,900 extra deaths than would have typically been expected.

But a fifth of these deaths occurred not due to exposure outside, slips on pavements and crashes on icy roads. These deaths were caused by living in cold housing. Poor quality housing actually led to more deaths than road accidents, alcohol or drug abuse.

– Cold homes are also associated with increased incidence of colds and flu.

– They also worsen existing conditions such as arthritis and rheumatism.

It appears that sometimes our attempts to improve housing are causing unforeseen consequences.

For instance, if the increased airtightness achieved through energy efficiency improvements are not matched by equal improvements in ventilation they can cause increased allergic reactions.

In addition, problems are increasingly being identified with excess heat and overheating (particularly in new airtight homes) in urban areas. The Building Research Establishment (BRE) has emphasised that excess heat morbidity/mortality does happen despite being harder to directly attribute than deaths caused by cold homes.

Poor Indoor Air Quality (IAQ) is an area of particular concern, and not just in new houses or buildings.

It is estimated to annually cost the UK 204,000 healthy life yearsthrough its links to:

The Royal College of Physicians suggests that, at a minimum, thousands of deaths per year are directly caused by pollutants in the air.

Poor IAQ and insufficient ventilation also means that condensation caused by humidity and moisture in our bathrooms and kitchens is allowed to develop, leading to mould build up and spread.

Around a third of people in the UK report having mould in their homesand it can increase the risk of:

The effects on mental health of noise pollution are fairly well documented.

Noise is far from the only way in which poor quality housing affects our well-being.

We highlighted above the link between cold homes and susceptibility to multiple mental health problems. Shelter has found that poor quality housing has negatively impacted the mental health of one in five English adults in the last five years.

The cost of our ‘broken’ housing market

The cost of poor housing to the NHS, in terms of the first-year treatment costs of specific health hazards, is estimated to be at least £2.25 billion across the UK.

In reality, associated costs would increase this figure by two-and-a-half times to £6.25 billion per year.

Taking into account other factors, such as the impact on educational attainment and economic performance, the BRE estimates that the total ‘social and economic cost of leaving people in poor housing’ is in the region of £18 billion per annum in the UK.

We’ve put together an infographic that gathers many of the statistics and insights shared in this post. It makes it absolutely clear why action is needed.

We’ll be posting some more thoughts on solutions to adopt in the coming weeks.

Indoor climate solutions for homes, offices, schools have been our focus for many years. We were happy to provide consultation to the All Party Parliamentary Group for Healthy Homes and Buildings as it compiled this report and we share many of its concerns.

If you’d like to find out more about what we offer you can take a look at our full range of ventilation, cooling and indoor comfort solutions to learn more.

[1]The Decent Homes Standard is a technical standard for public housing introduced by the United Kingdom Government.

The criteria for the standard are as follows:

1. it must meet the current statutory minimum standard for housing

2. it must be in a reasonable state of repair

3. it must have reasonably modern facilities and services

4. it must provide a reasonable degree of thermal comfort.