The show goes on with Keston 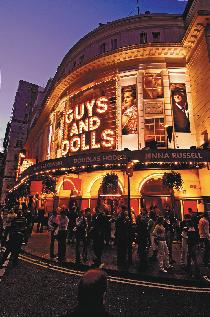 Keston Boilers was LA Maintenance’s first choice when it was asked to replace existing, unreliable heating equipment at Piccadilly Theatre, London, with the latest high efficiency models in the quickest turnaround possible.

LA Maintenance had been successfully servicing Piccadilly Theatre’s aged heating plant for several years but the time had come to replace the boilers before they failed beyond repair. The Ambassador Theatre Group, owner of the Piccadilly, was keen to install high efficiency condensing boilers because their environmental benefits complemented the Group’s green ethos. It also sought equipment offering greater reliability and fuel efficiency over conventional models, enabling the company to benefit from the Enhanced Capital Allowance Scheme. As the major west end theatre was running the hit musical Guys & Dolls, it was essential that the changeover occurred with minimal disruption to the performances and the comfort of its 1200 seat audience, the show’s stars and all the backstage operators.

Lee Wilson, managing director of LA Maintenance, explained why Keston’s condensing boilers were specified: “Keston designs its boilers from a heating engineer’s perspective and, therefore, takes into account problems and complexities that may be encountered in the field. Its technical assistance is second to none and was invaluable in this instance where we needed to incorporate modern technology into an existing system.

“Reducing harmful environmental emissions and energy consumption was important to our client. Keston’s products are renowned for their high efficiency and the company is able to accurately predict cost savings and payback. We also needed to limit time on site to ensure a speedy installation. Keston provided a prefabricated rig with a smaller footprint than previous equipment, providing more space in the plant room for maintenance. This will be much easier in the future as the rig is raised off the floor and Keston’s boilers incorporate accurate self diagnostic benefits.”

The rig consisted of four C110 Keston condensing boilers, providing 440kW heat, plus associated pipework and header that LA Maintenance was able to fit onto the existing main flow/return connections. No additional external ventilation was required. The sequence controls of the boilers were pre-wired and ready to connect to the Theatre’s existing control system, which ensured full compliance with current building regulations and best practise guides.