The secret of good acoustics 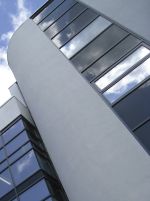 WindowMaster is supplying natural ventilation systems for two of the schools being constructed by the Newham Learning Partnership (NLP), a consortium which has been selected by Newham Council to deliver its Building Schools for the Future (BSF) programme.

WindowMaster worked closely with the design team in conjunction with both M&E consultants Hoare Lea and the architects Scott Brownrigg to produce bespoke schemes for two schools based on the NV Advance control system.

WindowMaster undertook acoustics studies to determine the optimum times for opening and closing the windows. Sales Manager Carl Sutterby explained: “The issue with noise was dealt with by allowing the windows to be opened between lessons and at class changeovers, negating the need for opening windows during lesson time in the classrooms where noise could be a problem.

“The remaining classes were able to operate under normal NV Advance control according to the CO2 and temperature requirements using the advance programming capabilities of the system.”

Carl Sutterby said: “This flexibility allowed the designers to use natural ventilation in areas where noise could have restricted the use of a passive solution.

“The eight classroom extension to Rokeby meant that the actuators and zones added to the system were given new IP addresses and parameters without adding major cost upheaval. This will apply to any new areas added to either school in the future, further demonstrating the system’s flexibility.”

WindowMaster was chosen to provide the window automation systems for Lister and Rokeby schools because of its ability to provide a complete installation, in particular the central computer control system, and a weather station.

The control system understands and knows how the wind speed and direction on all façades will influence the airflow through the windows on each level and location in the façade. It determines the Cp values (pressure coefficients) individually for each window by calculating the relevant air pressures from different wind speeds and directions.

WindowMaster carries out computational fluid dynamic (CFD) calculations for 16 wind directions for the specific building and its surroundings. Based on the calculations the Cp values are determined and programmed into the control system, which enables precise control of the individual windows resulting in an optimal indoor climate.

Each zone operates independently of the others according to the specific external conditions relevant to those windows and the internal environment.

It is the only system in Europe that intelligently monitors windows to prevent entrapment as an integrated function of the motor and control system.

If an object becomes trapped in a window and prevents it from closing the amount of current drawn by the motor instantly increases. This is detected by the microprocessor which immediately reverses the motor to release the window, therefore reducing the possibility of serious injury.

The system can be retrofitted on many existing windows as well as being installed on new buildings. It can operate on a broad range of window types, including top and bottom opening, sliding and parallel opening. The system can also be used on windows for heat and smoke ventilation.