The principles of evaporative cooling 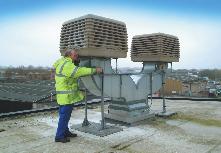 Centuries ago, the ancient Egyptians used evaporative cooling to reduce the temperature inside their buildings. Water saturated cloth sacks were placed in openings in the structure of the building. As warm air entered, it passed through the sacks and was cooled. Evaporative coolers have been used in warmer climates such as the USA, Australia and the Middle East for many years. As the effects of global warming are felt in cooler climates such as Europe and the United Kingdom the use of evaporative coolers is becoming more widespread.

On days when heat or humidity, or even excess pollen, causes discomfort, people often head off to lakes or the seaside in search of relief. Evaporative Air Cooling is, in many ways, simulating the cooler conditions so often found at or near large expanses of water. It makes it possible to effectively cool factories, warehouses, offices and many other areas.

Evaporation will take place when the humidity is below 100% and the air begins to absorb water. Any given volume of air can hold a certain amount of water vapour and the degree of absorption will depend on the amount it is already holding. The term Relative Humidity describes how much water vapour is already in the air; relative to the amount it is capable of holding at the same conditions of dry-bulb temperature and atmospheric pressure. Air is saturated when it cannot hold any more water vapour. Imagine it as a sponge; if the sponge held half as much water as it was capable of holding, it would be 50% saturated. In the case of air, we would describe the Relative Humidity as being 50%.

Energy is required to change water from liquid to vapour. This energy is obtained in an adiabatic process from the air itself. Air entering an evaporative air cooler gives up heat energy to evaporate water. During this process, the dry bulb temperature of the air passing through the cooler is lowered.

When sitting in a breeze people feel cooler. Air blowing on a person increases the rate of evaporation of moisture from their skin. Heat for this process is gained from the air, but more importantly, it is also gained from the person’s skin. The person feels cooler, even though the dry bulb temperature of the air remains the same.

In a direct evaporative cooler, such as Breezair, a pump circulates water from a reservoir (tank) to the top of absorbent cooling pads. The pads become saturated with water as the water gravitates back into the reservoir. Powerful centrifugal fans draw warm air from outside through the wetted pads. As the air passes through the pads it is cooled by evaporation and the cooled air is then circulated through the building.

Evaporative air-cooling systems do not re-circulate air as this will result in hot and humid conditions. Air from an evaporative cooler is used once only; it is forced from the cooler, into the air-cooled area and then out of the building. Constant cool air movement pushes heat out along with stale air, smoke, odours and pollution. Therefore sufficient natural or mechanical venting facilities must be provided to ensure the air can escape to the outside.

Evaporative air-cooling is particular suitable for commercial and industrial applications, where compressor-type air conditioning is prohibitively expensive. Quick and easy to install, coolers are fitted to the exterior of the building, either on the roof, the sidewalls or at ground level. A system of ductwork and air diffusers is then used to channel the cool air to where it is needed. Rigid pre-fabricated metal ducts are the most common, but for some installations flexible ducts can be used. For spot cooling in factories and warehouses, vertical ducts with plenum boxes are also common.

Recent tests showed no Legionella bacteria present in Breezair. In 2004 and 2005 tests were conducted at a factory by an accredited German laboratory to test for compliance with the German VDI 6022 Standard for hygiene. The furniture factory had installed a number of Breezair air coolers to cool its main production area. Every cooler was commissioned to have the 60 min per 24 hour pad drying cycle enabled. 16 months later the tests reported overwhelming results. No trace of Legionella bacteria was found in the coolers or in the air streams emanating from them. A huge 53% of other bacteria had been scrubbed from the air stream as well as fungal spores and 25% of all endotoxins.

Drawing fresh air from outdoors, evaporative coolers offer a great health advantage over refrigerated air conditioning, which re-circulates the same stale dry air over and over.

• Outside air often contains dust and pollen. Evaporative coolers filter the incoming air, removing most airborne dust and pollen particles. The wet cooling pads trap most of these particles, which are washed down to the unit reservoir by the circulating water.

• Evaporative coolers do not dry out the air like refrigerated air conditioning and do not require an airtight building structure.

• Generally installing evaporative cooling costs up to 50% less than refrigerated systems and can save up to 80% of energy costs.

• Evaporative cooling does not use environmentally harmful CFC gases.

• Doors and windows can be kept open.

It is not just during the summer that evaporative cooling is needed. High temperatures in factories, warehouses and office complexes effect workers and therefore productivity throughout the year. Evaporative cooling provides businesses with a cost effective solution that helps increase production, decrease downtime and improve workers’ morale.