The importance of daylight 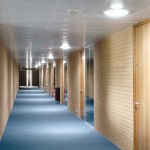 Monodraught launched SunPipes in the UK 14 years ago and these proved an immediate success with schools both in the refurbishment of existing school buildings and to be incorporated into new school designs.  Architects and consultants were very quick to recognise the advantages of using SunPipes instead of conventional rooflights because of the advantages of eliminating the heat gain and heat loss associated with conventional rooflights and glare that occurs in many instances.  The reduction in energy consumption, by eliminating the need for electric lighting during daytime use, was also a significant factor but yet another advantage that cannot be overlooked is the health benefits associated with piping in natural daylight.

I studied two years at Nottingham University taking my Masters in Environmental Design and carried out research into the subject of the benefits of SunPipes which revealed a number of very interesting facts.

Daylight is a vital natural resource for schools, being preferred to electric lighting because of its varied intensity, pattern and colour. It is a mixture of diffuse light from the sky and direct light from the sun, when entering through a space.  It has been said that it defines and models an interior, creating a pleasant visual environment and a feeling of well being, which by itself stimulates performance (Lighting Guide LG10, 1999).

Early designs of schools had classrooms with large windows, but as these designs have advanced the problems of space constraint and the need for flexible spaces conflicted with the daylight design of many schools.

However, daylight and thermal comfort sometimes conflict with each other i.e. the greater the window area, the greater the amount of daylight penetrating inside the space, but this leads to greater heat losses and heat gains through the glazing.

The recent discovery of a novel photoreceptor in the retina of the eye, has confirmed that light entering the eye is also responsible for certain non visual biological effects in the body, such as the regulation of the circadian rhythm (sleep-wake pattern), the production of hormones such as cortisol (stress hormone) and melatonin (sleep hormone) (Zeitzer et al, 2000; Cajochen et al, 2005; Scheer & Buijis, 1999 cited in Van Bommel 2006), thus playing a major role in resetting/adjusting the internal biological clock. Consequently, a lack of light can significantly affect health and well being resulting in sleep disorders, depression, Seasonal Affective Disorder, (SAD) reduced alertness and poor performance. This discovery reinforces the concept that the luminous environment should not only be designed for visual perception but also for well being (Van Bommel W.J.M, 2006).

These findings confirmed the fact that daylight represents one of the most appropriate external force for stimulating both vision and the synchronisation of the internal biological clock. Daylight suppresses melatonin secretion and increases alertness thereby improving the performance of the student.

Insufficient light can reduce the student’s general ability due to the effect lighting has on physiology. Liberman, 1991 confirmed that reading is the most visually stressful task for students. Stress causes a contracted visual field in the eye that can lead to decreases in information processing and learning ability. Daylight, which provides the richest spectral, usable light, is capable of easing some stress to the eye.

Physiological benefits due to daylight on school children include less dental decay, improved eyesight, growth and immune system. Edwards and Torcellini (2002); McBeath and Zuker (Liberman 1991) and Hathaway, et al 1992; showed there is strong correlation between the amount of sunlight a child is exposed to and the level of dental decay, making daylight a very important element for cavity prevention.

The impact of daylight

Numerous studies prove the positive influence of daylight on students and teachers. The findings of the Heschong Mahone group, 1999 clearly show the impact of daylight on school children.

The students with the most daylighting in their classroom performed 20% faster on maths tests and 26% faster on reading tests in one year than those with the least. Similarly students’ progression was improved by approximately 20% in a well designed classroom with diffused light. The observations from the study revealed that daylight from skylights had larger impacts on the positive results of student performance over all the other attributes of windows (view-out etc.). The possible causes of good performance from the students due to daylighting were identified and summarised as improved visibility (due to higher illumination levels and light quality), better distribution and colour rendering.

A study at Johnston County School by Nicklas and Bailey in 1997 investigated the academic benefits of daylighting and found that students in daylit schools had higher maths and reading scores when compared to the scores of the children who studied in an artificially lit environment. At the daylit Durant Road Middle School in North Carolina, the teachers who worked for more than a year state they feel better mentally and physically because of the daylit environment (Bailey,1998 cited in Edwards & Torcellini, 2002). The study by Kuller, R and Lindsten, C, 1992 asserted that there was a strong association between the amount of daylight and a student’s behaviour especially when ranked for sociability and concentration. The Daystar article, ‘Benefits of Natural Daylighting’ (1998, ibid) states that there are increased achievement rates, reduced fatigue factors, improved student health, improved attendance and enhancement of general development.

From the above research and studies it is evident that an abundance of natural daylight influences humans, physically and psychologically to a great extent. Since buildings are designed for human habitation; lighting designs should consider psycho-physiological well being to provide a healthy environment. When the individual well being is enhanced, the mood, performance, attitude and the overall progress in academics will also be improved.

Daylight has better light quality than electric lighting in terms of distribution, colour rendering and modelling and is more appropriate for performing visual tasks. The variability of daylight brings in greater interest to the occupants which cannot be achieved by electric lighting. It can also be said that children’s improvement in performance can be attributed to lack of distraction from the view out of windows.

SunPipes are technologically exciting because of the long distances over which they can operate. Sunlight can be channelled into any area of the building through the mirror finish reflective SunPipes. It offers the best distribution of diffuse daylight with deeper penetration and uniformity than traditional skylights along with improved security. During daylight, SunPipes eliminate the need of electric lighting not only on the top floors of a building, but can also bring in daylight to rooms in lower floors.

A growing body of evidence suggests that daylighting plays an important non-visual role in human health and well-being through the circadian system. Currently in the United Kingdom, there is only little scientific evidence available about the effects of daylighting in schools however even the little proof shows positive effects and are worthy to be followed. The magnitude of advantages and benefits that daylight provides to students and teachers with the use of SunPipes is enormous.