Taking the heat out of the kitchen 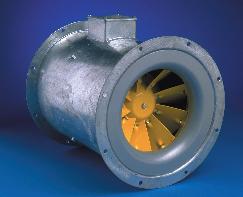 Now the drive for improved safety standards and reduction of odour emissions has created a new set of requirements for ventilation systems serving the UK’s commercial kitchens. Reaction has been quick and ingenious, with innovative new solutions already entering the market.

That market is potentially huge. Every non-domestic kitchen across the country from the workplace of the star TV chef to the humble factory canteen is affected by the changes. These arise from a number of sources – principally increased use of carbon filters to eliminate cooking odours and the requirements of DW172 and the Loss Prevention Council’s publication of LPS1263 (endorsed by the Association of British Insurers). Both new standards demand the use of baffle filters as the primary grease filter, which means that fans serving kitchen extract systems must now be capable of producing higher static pressures, while still maintaining a high volume flow rate and low noise characteristics.

A range of solutions is emerging to satisfy these demands from leading manufacturers including Elta, Flakt Woods, Helios and Vent-Axia.

These include the Elta Multiflow SMB and SMC ranges, the Vent-Axia Quadra MFQ and the Flakt Woods Axcent 3. Typically producing up to 2.5 times the pressure development of their axial counterparts, mixed flow fans lend themselves well to commercial kitchen ventilation. Their blade design is self-cleaning thus eliminating grease build up and all are suitable for mounting externally (the Quadra fan offers a weatherproofing option). All three manufacturers offer speed controllers for all sizes in both single and three phase options. Typical performance curves run from 1.0 – 3.5m³/s and from 50 – 700 Pascals. However, the complex blade construction tends to make these fans an expensive option often ruling them out for many smaller independent restaurants and take-aways.

Here choice comes in the form of the Elta Powerduct SPD and the Flakt Woods Powerbox. Both boast self-cleaning, backward-curved blades and speed control throughout their ranges. Acoustic insulation on the Powerbox together with the ability to alter the discharge position (straight through, or at any 90º orientation to the inlet) makes this an ideal candidate for kitchen ventilation. Typical performance curves for both makes run from 0.4 – 2.7m³/s and from 50 – 700 Pascals.

No product in recent ventilation history has seen such a fast rise in popularity as the two-stage axial. Elta, Vent-Axia and Flakt Woods all have offerings in this stable namely the Elta Compact Plus, the Vent Axia Turboprop and the Flakt Woods MaxFan. The simplicity of design with its ingenious new use of tried and tested axial technology keeps costs to a minimum, making this fan type popular for independent restaurants and take-aways. Both Elta and Vent- Axia have opted for compact motors allowing them to fit both stages into a single casing of similar length to that of a standard single stage long cased axial fan. Flakt Woods on the other hand have chosen a true two-stage, with each stage being a separate fan in its own right. This enables the contractor to install each stage separately if so desired; thereby minimising the weight to be lifted and easing installation. All three offer aluminium blades, a single terminal box to simplify wiring and most are speed controllable using voltage regulation or inverters. Typical performance curves run from 1.7 – 7.0m³/s and from 50 – 900 Pascals.

Since CCL introduced its interlock range and associated devices, customer requirements, changes and clarification in the interpretation of BS6173:2001 along with the recently issued DW172 has meant that the consultants, designers and installers demand more.

And they’re not just looking for different boxes to put on the wall! They want standard solutions – that can be supplied off the shelf with the built in flexibility to enable minor changes to be made to match individual project needs at site level.

More emphasis is also being placed on improving the condition of the working environment and the health and safety of the operatives in the catering sector. This has led to requirements, such as make-up air being controlled to certain minimum discharge temperatures, depending on the type of supply air used in a particular kitchen, for example from a minimum of 10°C for a outboard canopy to a minimum of 16°C for a ventilated ceiling or HVAC general make-up system. Combine this with the requirement that the kitchen should remain under a negative pressure, even when the speed or number of canopies online is adjusted, leads to the need for an integrated controls solution.

Requirements for the reduction in carbon emissions are also becoming a factor in the design and operation of the system. Use of integrated automatic speed control, linked to the workload of the kitchen and the monitoring of CO and CO2 levels are all becoming factors which have to be addressed.

For example, a client may require a system, which has an input fan as well as a canopy extract, both to be speed controlled. The supply air is to be tempered by an electric heater battery. The gas supply requires it to be interlocked with the system fans. Gas pressure proving is also a must. How many boxes do you need? The answer is just one – the CaterSense -04 (EHB).

The range comes in four standard forms 01 to 04 and within each there are a number of customer selectable modes. This coupled with its extensive range of speed control devices from simple manual units to 3 phase inverter controllers, thyristor controllers and LPHW control valves, enables most applications to be satisfied with one of the standard units. For those that don’t, we can supply a system solutions design service which is second to none.

For systems which require the building block approach, where the wiring for some reason cannot be all routed to one point, the product can also be supplied in a distributed control format. This means that the electric heater battery can be powered from a local supply via a local isolator/control unit and only a four core screened cable needs to be run between this and the CaterSense control module mounted within the catering area. The same can be achieved for the fans if so required.

For a simple kitchen with a single-phase input and canopy extract fan, along with a gas valve interlock the CaterSense is the simple answer. One power supply feed to the unit and the rest is just wired from the unit.

With many new features, such as touch pad technology, direct and indirect fan start/stop control and multi-function modes it is hard to highlight one above the rest, but one feature stands above all and that is the system Self-set commissioning mode. This enables the engineer to press a button and follow the unit’s instructions and it will calibrate and set itself based on the plant’s performance and system requirements. What could be simpler?

The fluid nature of the industry ensures an ongoing need for intuitive design solutions. Fortunately a combination of skilled engineering and marketing expertise makes those solutions readily available.