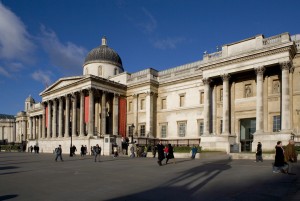 High efficiency boilers from Hoval are helping the National Gallery in London to reduce its energy consumption and carbon footprint, while maintaining a stable internal environment for the exhibits.

The National Gallery opened in 1838, occupying a dominant position in Trafalgar Square at the centre of London. The original building has been extended several times since then and now houses the national collection of paintings in the Western European tradition from the 13th to the 19th centuries.

The National Gallery has a strong commitment to sustainability, with ongoing initiatives to improve energy efficiency and reduce carbon emissions. In support of this policy, a decision was made to replace the existing boiler plant and consulting engineers hurleypalmerflatt were commissioned to design a more efficient solution.

Nigel Back of hurleypalmerflatt explained: “The base heat loads at the National Gallery are met by a combined heat and power (CHP) unit but the existing back-up boilers were oversized for meeting the additional heat loads, resulting in inefficiencies. We therefore designed a system that would be more efficient and responsive, while also providing the resilience required to maintain the critical internal environment.

“Having reviewed a number of manufacturers, we specified Hoval as providing the optimum combination of efficiency, reliability and best value,” he continued.

Using a pre-mix modulating burner with up to 12:1 turndown, the UltraGas boilers are able to respond efficiently to variable heat demand while taking advantage of condensing opportunities for even higher efficiency when return water temperatures permit.

In addition, three dual-fuel SR-plus boilers have been installed to ensure that heating can be maintained to protect exhibits in the event of interruption to the gas supply.

In parallel, the heating system has been reconfigured, replacing the existing single circuit system with a primary circuit and several secondary circuits to provide better control.