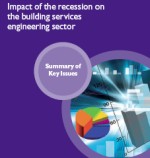 SummitSkills, the Sector Skills Council for building services engineering (BSE), has published research that highlights the possible effects of the recession on the sector’s workforce.

A sample of BSE consultants were interviewed to gather views on the recent economic downturn and how it may affect the sector’s workload across five key work areas: private commercial; private industrial; private housing; social housing and major public works.

Key issues arising from the research include:

These predictions are in line with recent Office for National Statistics figures that report the UK construction industry has suffered over 45,000 redundancies in the three months to December 2008.

Keith Marshall OBE, Chief Executive of SummitSkills, said: “Our estimates are based on assumptions that can be influenced by numerous variables, but it’s inevitable that businesses will be, and have already been, affected by the recession.  Rather than doom-mongering, our emphasis is on being realistic and providing the sector with an appreciation of where consultants feel that work may be cut back.  By being aware of the potential consequences, we can start to prepare contingency measures to assist BSE employers.”

SummitSkills is already working on a number of actions to help minimise the impact the recession might have on the sector’s workforce and skills levels. These include redeployment and training, maintenance of redundant apprentices, supporting employers to develop the skills of existing workers in new building services market areas, supporting the education and training delivery infrastructure and maintaining the stream of new entrants in preparation for the sector coming out of recession.