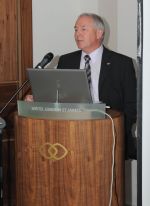 A cautious welcome to the Coalition Government’s approach to technology training has come from Keith Marshall OBE, Chief Executive of SummitSkills, the sector skills council for building services engineering.

Speaking at the spring conference of the Building Services Engineering Employment Agency Alliance, Mr Marshall referred in particular to two recent statements made by members of the new administration, both of which provided some cause for optimism.

The first, from Universities and Science Minister David Willetts, a self-confessed believer in rigour and excellence in vocational qualifications just as much as in academic ones, emphasised the value that was being placed on qualifications like City and Guilds, BTECs, HNCs and HNDs, and on apprenticeships, which should wherever possible be equivalent to A-levels and linked to employers.

Mr Willetts insisted: These could be the route to that elusive technician level of skills which is one of our economy’s great weaknesses.”

Mr Marshall went on to highlight a second statement – this time from John Hayes, Minister of State for Further Education, Skills and Lifelong Learning at the Department for Business, Innovation and Skills.

Mr Hayes had stressed that: “Adult learning is a cause which I have upheld throughout my whole career in Parliament, which I hold close to my heart, for which I argued passionately in opposition – and which, with equal passion, I will champion in Government”.

And he added that, in emphasising the importance of adult learning, he had found in Business Secretary Vince Cable a kindred spirit.

While acknowledging that it remained to be seen to what extent the Government could stand firm on such pledges in the light of the widely perceived need for significant spending cuts, Mr Marshall suggested that they represented a promising beginning.