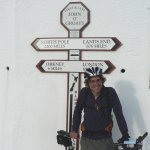 The 24-year-old Buildings Engineer clocked up an incredible 1200 miles as he ran, swam and rowed his way from the Isles of Scilly to the Orkney Islands

Stuart, who works at the Leeds office of AECOM, took just over three weeks to complete his challenge and even managed time to climb the UK’s three highest peaks on his way. He said: “It feels very weird getting off the bike at work and not carrying on all day, but the legs feel fine. It was difficult trying to cope with the change in conditions. It seemed the British weather system was trying to throw everything it had at me from searing sun to torrential rain.

“The worst of the weather was around Glasgow, where a severe weather warning was in place recommending all non-essential journeys be cancelled. In places my feet were splashing in the water as I cycled up the road.”

Stuart’s journey began in a kayak around the Isles of Scilly where he was joined by passing seals and dolphins. But his quest to do the entire journey by muscle power alone were immediately thrown into jeopardy when bad weather meant he was unable to do the crossing back to Land’s End.

He was forced to take a ferry crossing meaning 20 miles of his entire trip were not by human power.

From Penzance he then ran and mountain biked through Cornwall, Devon and Somerset, then into Wales. After a quick jog over Mount Snowdon, he made his way back to England where he met up with colleagues from work for a part in the Lake District.

He then swam across Derwent Water (probably the hardest mile of the trip!), and more cycling into Scotland. He kayaked from Fort William along the Caledonian Canal, Loch Linhe and Loch Oich before being fished out of Loch Ness by the RNLI when conditions became just too challenging.

After a quick trip to Inverness for a new pair of glasses which he lost in the dip in Loch Ness, Stuart cycled all the way to Orkney. His plans to row to the Shetland Isles were thwarted by the expense of carrying his Ocean Rowing boat to Scotland.

Despite missing out on his ultimate goal, Stuart was overjoyed at his achievements and is now hoping to raise as much money as possible for his three chosen charities Avert Aids, Water for kids and NSPCC.

He added: “I didn’t quite achieve what I had planned to, mainly because of the cost of transporting the Ocean rowing boat to Scotland, but I’m happy with what I did. I’m still trying to raise as much money as possible, and hopefully people might support the challenge more now I have done something.”