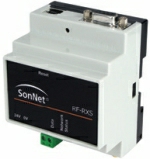 Following the successful launch of its award-winning SonNet range of wireless temperature and relative humidity sensors, Sontay has introduced a new Tridium NiagaraAX driver for its SonNet network radio receivers. This latest innovation enables quick and seamless integration with Tridium’s range of JACE controllers as part of a NiagaraAX framework and opens up the system to BMS protocols such as BACnet, LonTalk and Modbus.

Tridium’s NiagaraAX is an open, Java-based framework which integrates diverse building services systems, control devices and communications standards, including LONWORKS, BACnet, Modbus and others into an interoperable, web-enabled application environment. The new driver ensures Sontay’s RF-RXS receivers serve up a Tridium compatible web interface where SonNet wireless sensors are used on a project. This allows engineers to gather measurement data from the sensors and perform radio network management services as part of a building’s Tridium NiagaraAX framework.