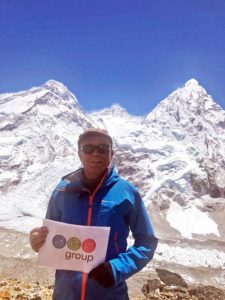 SCS Group Managing Director Allan Meek has made it to the summit of Mount Everest after six weeks of intense training, climbing, acclimatisation and waiting.

Allan, 56, who owns the BMS and smoke control company, reached the top of the world’s highest mountain on  Tuesday, May 16, as dawn broke in the UK. Believed to be the oldest Welshman to summit Everest, Allan reached the top at 9.45am local time.

Allan, who is currently on the descent back towards the other camps and finally Everest Base Camp, is part of a team of eight members and nine climbing Sherpas in an expedition led by Nepalese company Ascent Himalayas.

It continued: “Ascent Himalayas family would like to congratulate all our members and climbing guides for the successful Everest Expedition 2017.

“Also we thank Pasang Tenzing Sherpa, Everest Team Leader, for his great guidance throughout the journey and Mingma Tsiri Sherpa for his great management during the expedition and keeping us updated with all the details.”

Allan has been sponsored in his quest by SCS Group, which designs and provides intelligent smoke control, BMS and passive ventilation systems for companies and buildings across the UK. Its supply-only sales arm Easivent provides a comprehensive range of control panels and equipment for use on smoke ventilation and natural ventilation projects.

“I had no doubt he would make it to the summit, he always achieves whatever he puts his mind to. I can’t imagine what’s he’s planning to do after this!”

Ben added: “I hope he stays close to home for a while, my girls are really missing him.”

After returning to Base Camp, Allan and his group will pack up their camp and prepare to descend. This will see them trekking to Pheriche, Namche and Lukla over a number of days before flying to Kathmandu. He will then have a rest day in Kathmandu before departing for the UK.