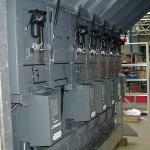 When one of the country’s largest energy companies identified a need to investigate maintenance for a 10 year old switchboard, it turned to Schneider Electric for evaluation and ultimately a major refurbishment.
The seven panel portable skid mounted switchboard consists of six of Schneider Electric’s Ringmaster distribution panels and a metering unit.  Investigation revealed that one breaker, together with the Voltage Instability Predictor (VIP300) relay, needed repair.  For long term reliability and to add significantly to the life expectancy of the equipment, Scottish and Southern Energy elected to have the entire switchboard refurbished.  The problem was that because the skid mounted board was deployed at various sites, the need to have it back in service quickly was imperative.
The complete panel was taken to Schneider Electric’s Leeds factory, where the original panels were made.  A complete refurbishment was undertaken to return the six Ringmaster units and the meter to ‘as new’ condition.  Moreover, before releasing the completed unit, it underwent a thorough functionality test, gas check and trip testing. Finally, the panel was cleaned and repainted.  In short, it was returned to Scottish and Southern Energy looking like a brand new switchboard.
Costing significantly less than a new equivalent switchboard, Scottish and Southern Energy saved money; lost no resource because the refurbishment was completed in a tight timeframe and to deadline; and has a unit that is assured of being reliable for years to come.
Chris Hammond, Spare Parts Manager for Schneider Electric commented: “Refurbishments are often a cost-effective way of protecting a client’s investment in electrical distribution equipment.  Our specialist team has many years experience in returning a wide range of equipment to a very high specification, and furthermore, doing so to short deadlines.”
Roger Wright, Scottish and Southern Energy said: “The equipment was returned tested and shining like a new pin. These skid mounted units, because they are moved, must be rugged and reliable. We can now depend on the panel without concerns about its age or condition”.