SAV Systems has supplied 416 x 3-Series Flatstation heat interface units for use in a major refurbishment of four council-owned blocks of flats at International Way in Southampton. The project was managed by British Gas on behalf of Southampton City Council, with mechanical and thermal insulation works being delivered by contractor Lawtech. 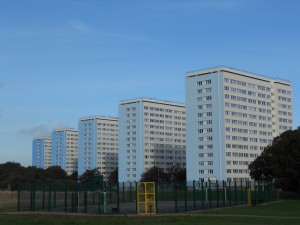 A major element of the project was the replacement of the existing space heating and domestic hot water systems in the flats. “Originally the flats were heated using electric underfloor heating, with domestic hot water from point-of-use water heaters,” recalled Mark Ashley of British Gas. “The space heating was controlled centrally, which meant that tenants had no local control of temperature, other than by opening windows and wasting energy.”

Lawtech’s Tony Adshead added: “The new system uses gas-fired condensing boilers on the roof of each block, serving newly-installed radiators and hot water cylinders in each flat through the FlatStation units. The flats have also been fitted with thermostats so that tenants can control their heating efficiently, as well as thermostatic radiator valves for enhanced local control within each flat.