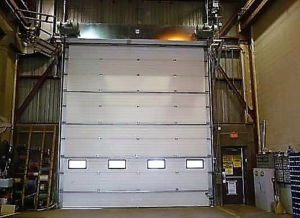 Which comes first? Saving energy or solving a long-term problem? How about doing them both?

This facility was suffering from a high level of cold air ingress through the large loading door.  The internal temperature would drop below an acceptable level and the thermostat control activates the gas-fed heaters into operation.  The heaters then operate until the temperature reaches the set recovery point.  Due to the nature of the door opening and closing cyclically, the heating system would struggle to maintain the temperature within its set parameters, driving up energy consumption.

This study was carried out to assess the recovery time differences with and without the Enershield air barrier running, as well as the level of comfort that is maintained in the building.  This test was done in addition to the separate gas consumption study performed by Atco Gas showing an 18% overall reduction in this same building.

Enershield air barriers create a virtual door by re-circulating ambient air and forcing it across an opening to create a significant seal.  The seal separates the atmospheres on either side and stops the transfer of temperature, humidity, dust, odours and insects.  With just a draught of air creating the barrier, vehicles and pedestrians can pass without obstruction.

Following a detailed site survey, Enershield proposed the installation of an Ultrashield US-192 unit over the doorway.  They are designed and fitted with automatic sensors which activates the air barrier when the doors are open.  By preventing the thermal exchange through the door, the air barrier would assist in stabilising temperature within the facility, reducing the heating systems recovery time, thus reducing energy consumption.

The test was performed on a 16’x16’ door equipped with the Ultrashield 192 that faces south, the outside temperature was -15°C and the building set point was +21°C.  The recovery time study was formed of two tests: 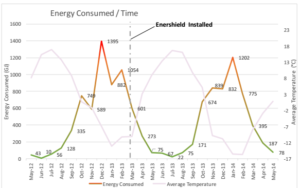 In summary, the report showed that not only did the Enershield air barrier maintain a comfortable working temperature with the door open for an extended period, it also dramatically reduced the amount of gas consumed to reheat the space, saving a substantial amount of energy. An 18% reduction of gas consumption equated to a saving of appx £3000/year.

For more information on Enershield please call 01501 825024 or e-mail enquiries@cpa-group.com