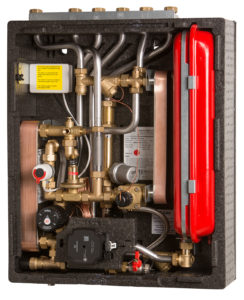 SAV Systems has welcomed the announcement of a new regime for testing heat interface units (HIUs), noting its potential to significantly improve the performance of heat networks.

“Under-performance of heat networks is often down to poorly designed HIUs that are unable to cope with variations in the system and fail to maintain the temperature differentials required for optimum efficiency,” observed SAV Sales Director Jan Hansen. “This new testing regime is more demanding than its predecessor and the adoption of the new test standard by the Building Engineering Services Association will ensure wider compliance,” he added.

SAV has supported HIU testing since the introduction of an earlier regime developed by Fairheat with support from the then Department of Energy & Climate Change (DECC). The first round of tests showed that SAV’s Danfoss FlatStation HIUs provided the lowest VWART (Volume Weighted Average Return Temperatures) values of all HIUs tested.

SAV will now be submitting FlatStations for testing under the new regime. “We are very focused on the performance of the whole system at both full and part load conditions and FlatStations are optimised to deal with varying system differential pressures and high performance at low, high and dynamic DHW tapping conditions,” Jan Hansen continued.