Saniflo UK has been recognised by JustGiving as a top fundraiser for Cancer Research UK. Positioned in the top three per cent of fundraisers in 2014, Saniflo regularly holds fund raising events for the charity that is close to its heart.

In September 2014, a team of four from Saniflo UK (pictured) cycled some 220 miles from the company’s UK headquarters in South Ruislip to the firm’s new global headquarters close to the Eiffel Tower in Paris in a bid to raise £4,000 for Cancer Research UK. 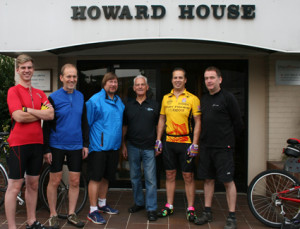 Managing director Tim Pestell said: “The journey took us four days. It was gruelling at times. Our sense of camaraderie kept us laughing and our sense of purpose kept us focused. We’re very pleased with the amount raised and would like to that everyone who supported us and we’re delighted to be able to contribute to Cancer Research UK in this way. The charity is very close to our hearts. Our former MD Paul Newson passed away in January last year after a seven-year battle with cancer. We like to raise funds for this hugely important cause in one big way at least once a year.”

In 2013 a team of 10 from Saniflo UK walked to the top of the UK’s highest mountain Ben Nevis in Scotland to raise funds for Cancer Research UK. The team completed the 1,344-metre/10 mile hike in six hours and raised £10,000 for the charity, beating their original target of £5,000.

In addition, every Friday for the past 10 years Saniflo UK has held a ‘dress down Friday’ with participants donating £1 each time to Cancer Research UK.