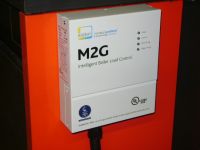 Installation of the M2G at boiler houses on the site was completed on behalf of Scottish and Southern Energy Contracting and its performance in the main boiler house was analysed using onsite meter consumption data, degree day corrected to normalise the influence of the weather. The analysis showed a 15% reduction in gas consumption, giving an anticipated payback of 14 weeks for the main boiler house, and 36 weeks for the entire site, reducing energy costs by over £89,000 a year.

“The savings delivered were during one of the coldest periods, with boiler dry cycling at a minimum, yet savings of 15% were still achieved,” recalled Richard Plester, Area Development Manager with Scottish & Southern Energy Contracting. “Quick payback, integration with existing controls and the ease to implement across an estate have demonstrated M2G as a key technology to reduce energy costs and carbon emissions,” he added.

The M2G is an intelligent boiler load optimisation controller that improves the efficiency of each individual boiler by removing “dry cycling”, an inherent problem found in over 80% of commercial boilers.

M2G complements and integrates with existing building controls resulting in substantial reductions of energy consumption with quick payback periods. The combination of volatile energy prices and increasing legislation is placing pressure on organisations to improve their energy efficiency. As a result, M2G has been incorporated within the estates of some the UK’s leading organisations.

Further information can be found at www.sabien-tech.co.uk