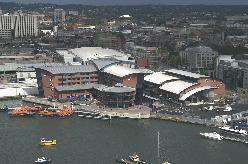 Mechanical and Electrical contractor The Dodd Group chose the tray for its low-cost, versatility and ease of installation. It was fitted throughout the 6,500m², five-storey building to carry mains and sub-mains cable from the main distribution board to all electrical services.

About 85% of the tray is 300mm width with the rest ranging from 100mm to 450mm. In all cases it passed through the walls to maintain earth continuity and fire barriers were added later. About 90% of the tray was suspended in the building’s ceiling voids; the remainder was mounted on walls or below the raised access floors.

Terry Moore, Project Manager for The Dodd Group, commented: “We initially chose the CF-54 for cost reasons, but were impressed by its flexibility and ease of installation. It’s easy to cut and shape on site using very simple hand-tools, and the Fastlock system saved us a lot of time.”

Main contractor on the RNLI project was Dean & Dyball Construction and the architects were Poynton Bradbury Wynter Cole. The Cablofil steel wire cable tray was supplied by Edmundson Electrical.