Reznor manage a piece of history 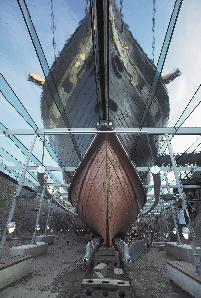 Air handling units that effectively remove moisture from the atmosphere are helping to preserve the only surviving steamship designed and built by Brunel. The units manufactured by Barkell are fitted with Reznor indirect gas fired heating coils and a Munters dehumidification system.

The SS Great Britain was regarded as a miracle of modern technology when it was launched in 1843. It was the first steam-powered ship to have both a screw propeller and an iron hull.

More than 160 years and one million sea-going miles later, the ship that carried first-class passengers across the Atlantic and around 15,000 emigrants to Australia, is as vulnerable as any less worthy vessel to the enemy of iron – corrosion. Those who stepped on board include Queen Victoria, and novelists Anthony Trollope and Jules Verne.

The ship ended her working life as a floating warehouse for coal and wool in the South Atlantic. An epic salvage project in 1970 returned the SS Great Britain from the Falkland Islands to Bristol, her birth place.

Consultants WSP designed a unique water-covered horizontal glass plate that creates an airtight space between the hull and the wall of the dry dock, providing a controlled dry atmosphere in and around the hull of the ship and preventing any damaging corrosion.

Dehumidification plant, designed by Munters of Huntingdon, runs constantly, removing excess moisture and reducing humidity to around 20 percent – the level at which corrosion will stop.

While the air-handling units protect the precious iron hull, the glass plates covered in a thin layer of water, allow visitors to view this part of the ship that would normally be beneath the waterline. Visitors can also descend under this glass ‘sea’ to stand below the impressive hull and propeller, and learn more about the ship’s conservation.

Inside the ship, which has been painstakingly restored from contemporary documents, a similar but larger dehumidification system housed in the ship’s boiler room controls internal temperature and humidity. This protects the inside of the hull from corrosion.