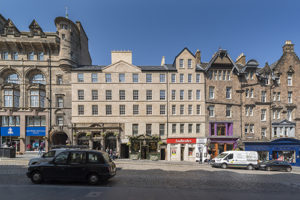 The 123 High Street development being delivered by Unicorn Properties is a four-storey building being built above three traditional stone buildings, in the last gap site on the Royal Mile in Edinburgh. The development will create 13 two-bedroom premium apartments, boasting quality fittings and finishes throughout and a prime city centre location close to Edinburgh Castle and the city’s other major attractions.

The four-floor building has been constructed on top of a concrete deck which sits above the High Street’s listed properties and much of the structure is made of timber. However, the extensive use of wood in the construction was a problem when it came to the specification of plumbing pipework for the apartments, as it effectively ruled out the use of traditional copper piping and an alternative needed to be found.

Consultant Ross Leask, from RSP Consulting Engineers, said: “One of the main challenges we had with the 123 High Street project was that the new pipework needed to be run through wooden joists. Copper piping would have been awkward to run through the joists and would also require soldering at the joints, so the natural solution was to opt for polymer piping instead. As well as being easier to install, due to its inherent flexibility, the use of polymer pipe meant our contractors wouldn’t need to do any hot work near the joists either.”

RSP specified REHAU’s RAUTITAN universal pipe solution for the 123 High Street job. Recently launched to the UK market, RAUTITAN is fully certified as hygienic for drinking water, and has a smooth inner surface to prevent deposits from forming in the pipe. When used with REHAU’s joint system, it offers cavity-free impermeable joints which eliminate the risk of microbial contamination, and the possible growth of legionella bacteria.

RAUTITAN can also be used for radiator connections and installations through the floors, skirting boards and walls. As it can be used for both drinking water, and heating systems, specification and installation of the pipework is very simple and cost effective. 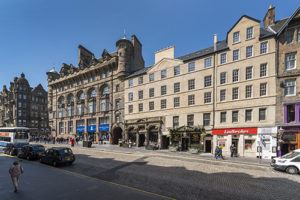 The 123 High Street development’s location above a number of period buildings meant that the plumbing installations for the apartments also needed to be reliable, something the project’s main contractor – Colorado Group – was keen to see reflected in the pipework specification.

David McGinigal, Director at the Colorado Group said: “Our primary concern with the pipework was reliability. Just one failed joint could cause irrevocable damage to the period buildings below us, putting the whole build back and increasing our costs considerably. We wanted to be able to close a wall and seal in a pipe with confidence, knowing that everything was working as it should. We couldn’t take any chances on the spec.

“When RSP recommended the RAUTITAN we were keen to give it a go, having worked with REHAU products in the past. We were confident the pipework would deliver the assurances we were after.”

Ross had also worked with REHAU products for a number of years, mainly using the RAUTHERM piping for underfloor heating jobs. He continued: “I have been really impressed with REHAU pipework and the joint system on previous projects so when we were choosing the specification for the 123 High Street project and we needed a polymer pipe alternative, I knew that the combination of RAUTITAN pipework and compression sleeve joints would be a great solution and would also guarantee no leaks – which was something we had discussed at length with David at Colorado.”

Lengths of RAUTITAN pipework are joined together using the compression sleeve jointing system, which produces a permanently sealed joint without O-rings. Using the specialist RAUTOOL device, installers simply expand the pipe end, insert the fitting and apply the compression sleeve. For the 123 High Street project, REHAU ensured the two teams from Fusion Mechanical doing the installation work had a RAUTOOL each to make it as quick and efficient as possible to fit.

Andrew Cooper, Director at Fusion Mechanical, said: “We have used other REHAU products in the past on commercial contracts so we were familiar with the compression sleeve jointing, although this was the first time we had used it with the RAUTITAN pipework.

“We were given a product demo on site by one of the guys from REHAU and two RAUTOOLs, which was perfect as we could have teams working on two different apartments at the same time. The pipework was really straightforward to install and REHAU were really helpful throughout the project, even helping to organise a RAUTITAN supplier for us on our route to the job. Given the ability to reduce install time thanks to the ease of installation we estimate there was a saving of at least 10% against a copper alternative.“

To date, 750 million joints have been fitted worldwide and zero leaks have been reported. With a 100% success rate, RSP knew the installation would be fit and forget and there would be no unexpected leaks for the apartment buyers to contend with. Made from high grade PE-Xa, RAUTITAN is also extremely durable so it won’t degrade or corrode for up to 50 years.

David added: “We’ve tested the system extensively for months with absolutely no issues. The RAUTITAN is a good product and one we can certainly rely on.“

Ross continued: “I’m so confident that the polymer pipework and compression sleeve joints combination is the best on the market, I actually used it for all plumbing in my own self-build house.”

RAUTITAN is available in fully flexible and rigid options, with pre-insulation if required for pipes between 16 and 25mm in the Flex range and 16-63mm in the Stabil pipes, offering installers a solution for virtually every application.

Drew Clough, Product Manager at REHAU, said: “When flexibility and durability are top priorities, RAUTITAN and EVERLOC is a winning combination for any project. The developers of the 123 High Street apartments can rest assured they are delivering premium apartments with plumbing pipework