The inaugural Southern Fishing Day from pumps and ancillary equipment supplier Pump House, which was sponsored by Fujitsu, proved a great success, despite a certain lack of fish. 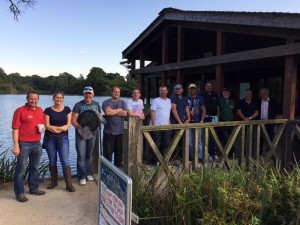 Helped by glorious weather, the event, for wholesalers and contractors, was held at Bury Hill Fisheries near Dorking, with the top prize going to Ben Mcgrath of BM Air Conditioning, with a catch of 20lb. The smallest catch prize of a bottle of bubbly went to Phil West, with a catch of just 11oz.

While Pump House has run several very successful annual fishing days, they are normally in the North or Midlands, this is the first time the Nottinghamshire based company has run an additional one in the south of England.

Says Pump House’s June Richardson, sales manager: “Everyone thoroughly enjoyed themselves and were already asking when the next fishing day will be so they could put it in the diary for next year.”

The Southern Fishing Day will be an annual event, so send your details to info@pumphousepumps.com if you are interested.