Productivity falls as the heat rises 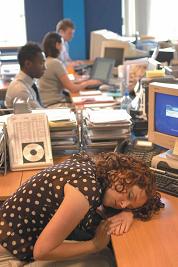 The increase in energy prices and demands for businesses to be more energy efficient is challenging building services engineers to look for advanced building and control systems that not only exceed legislation requirements, but also make significant savings on energy bills and improve the internal environment of a commercial or industrial building. Here, John Durbin, Sales Planning Manager at Daikin Airconditioning UK Ltd, discusses the importance of optimum temperature in the working environment and the effect this has on workforce productivity and performance.
In order to understand the implications that temperature has on a company’s employees, Daikin UK commissioned a national YouGov survey into the optimum office working temperature and the effects temperature has on workforce efficiency. This revealed a close correlation between a person’s working performance and the temperature of their office environment.

We carried out the survey specifically to help raise awareness amongst specifiers in the retail, hospitality, health and leisure industries about the business benefits of energy efficient and cost-effective air conditioning systems. Whilst air conditioning used to be viewed by many businesses as a luxury item, today, an innovative system is seen as a vital component for operational success.

The headline result found that 62% of office workers in Britain are too hot at work during the summer months. However, the most alarming statistic is the impact this has on the efficiency of British office workers; with 63% of those surveyed stating that working in an environment that is the wrong temperature makes them sleepy and lethargic, whilst a staggering 59% feel less productive.

The survey, which sampled over 2,000 people across Britain, also revealed that just under one in three (28%) of office workers suffer from increased stress when their working environment is the wrong temperature, and a quarter (25%) of those questioned become miserable.

Stress already affects one in five people at work and costs UK industry £3.7 billion each year. Whilst it can be caused by a number of factors, like relationships with colleagues, lack of communication, too much work or too much pressure, the results show that the climate people have to operate in at work is a major factor in contributing towards rising stress levels amongst British workers.

Whilst there is no statutory limit or Government legislation set for the upper temperature in a workplace, the national survey indicates a clear link between workforce efficiency and the temperature of their immediate surroundings. By controlling the temperature of an internal environment, not only will it make those who have to work in the building feel more comfortable at work, but it will help boost productivity and contribute towards operational success.

The office workers throughout Britain who suffer the most from being too hot in the summer were those surveyed in Wales and the West, the North East of England, Scotland and Lancashire. 76% of office workers in Wales and the West are too hot in their office during the summer, followed by 73% of people in the North East and 65% of office workers in both Scotland and Lancashire. And it is the youngest office workers (18-29 year olds) who seem to suffer the most, with 63% claiming they feel sleepy and 30% feeling miserable when their office is at an uncomfortable temperature.

These results are really surprising when you consider that the North of England and Scotland are traditionally the coldest parts of the UK. Most importantly though, the results mean that many businesses in these areas need to address climate control issues and create a more comfortable environment for their employees. By investing in these measures, their workforce will be happier, more efficient and less stressed.

The most effective way to control the internal environment is by installing an air conditioning system. In contrast to older systems, new air conditioning products are far more efficient and by replacing an old system businesses can make significant savings on their energy bills, especially with the rises in energy prices that are affecting businesses right across the country. Modern air conditioning systems also meet the latest legislation requirements of the Government’s Building Regulations, and may qualify for tax incentives for businesses and reduced VAT for residential properties.

Air conditioning is designed to create comfort by cooling, heating and filtering, along with dehumidifying the air. Not only does it cool in the summer, but it also efficiently heats in the winter as well, maintaining a steady and comfortable temperature all year round.

Responding to the needs of the building services industry, Daikin Airconditioning UK Ltd has recently introduced a new range to its portfolio, the VRV III (Variable Refrigerant Volume) system. This latest innovation to the market is based on heat pump technology and a two pipe system that enables all indoor units to be operational in either heating or cooling mode. Specifically designed for commercial and industrial applications, the heat pump systems tend to be used in an open plan area where a common temperature is required, such as a hotel reception, restaurant or open plan office for example.

Daikin’s VRV systems operate at their most efficient if used in conjunction with the current Daikin monitoring and control systems. One such system is the I-touch Controller with centralised monitoring and control via a web browser. The controller and system allows for the comprehensive monitoring of excessive cooling and malfunctions whilst scheduling operational times and promoting energy saving.

It is important to remember that whilst an air conditioning system can improve the internal environment of a commercial or industrial building, a system is at its most efficient if maintained correctly. It is therefore essential that a programme of maintenance is designed and implemented from the start to ensure that efficiency is maintained and the system remains fully operational throughout its lifetime.