Problem-solving at its best with the depot

Part of the international Hadley Group, Hadley Steel Framing’s light gauge steel profiles have been installed in a nine-storey student accommodation in Exeter, called The Depot. The £40m development will provide accommodation for circa 600 students.

As part of the broader build, the student accommodation has been designed to include a large retail and shopping area on its ground level. The space comes complete with a number of restaurants and bars, which add to the area’s dynamic appeal. Hadley Steel Framing provided a complete system from conceptual design through to installation using its pre-panelised, off-site bolted frame in conjunction with its composite concrete decking floor system.

Working with student accommodation can be difficult, requiring intense planning to ensure that timelines are upheld. The build at The Depot broke ground in July 2017 with the installation of the Hadley Steel Framing system starting on site in April 2018. Work was completed on the site in 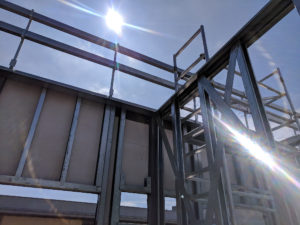 February 2019, with students scheduled to move into the accommodation from September 2019.

It was important that the project was handed over on time, as the internal and external finishes and services still needed to be fitted out as part of the build programme. As a result, all the teams working on the project needed to consider time efficiencies from the earliest stage of the project’s development. To this end, the specification team looked for products that could be delivered and installed on site as efficiently as possible.

Hadley Steel Framing’s light gauge steel systems were considered ideal. The flexible systems could be delivered and installed easily on site and were used for some of the accommodation’s most critical components. This was particularly useful for the installation of the bathroom pods, which could be transferred by crane into position. The bathroom pods were installed across each of the 601 bedrooms, saving a considerable amount of time for the contractor. Installing these modular units was an easier process than the more traditional method of building the bathrooms in situ. As a result, the contractor could complete the task independently and didn’t need to spend additional money employing specialist trades. 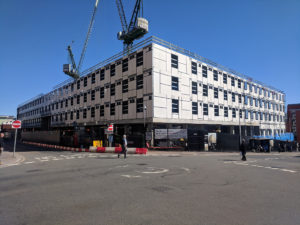 Hadley Steel Framing also supplied pre-assembled panels for the development, which could be simply erected on-site via the tower cranes. The products arrived on site with all of the openings formed and steel brickwork support plates already in place. This allowed the façade installers to begin their work immediately, which once again reduced the time needed for project completion. Hadley Steel Framing supplied the main structural components of the external and internal wall panels, composite floor slabs, steel brickwork support plates, metal stairs and pre-panelised roof structure.

Speaking about the project, Henry Yolland, Package Engineer for the main project contractor, Sir Robert McAlpine, commented: “Hadley Steel Framing systems were used extensively throughout the project and made work much easier to progress. The company’s systems were particularly useful with regard to installing the bathroom pods, which we were able to simply crane into position and fit into place. The pre-assembled panels were very similar and once again, we could simply erect them via the tower cranes.”

He continued: “Working on The Depot was an enjoyable experience, and it has been great to work on such a significant development. As with so many jobs in the construction industry, this project really came down to problem-solving. With Hadley Steel Framing we have found a very professional company with a great attitude to overcoming challenges.”

As well as all the other steel systems, the project also utilised a scaffold-less edge protection system, as well as pre-fabricated steel frame stair units all designed and detailed in house by the Hadley Steel Framing technical team.

Work on The Depot has now been completed, with students scheduled to move in from the start of September. The project reaffirms just what’s possible when construction firms from across the supply chain work collaboratively to overcome complex challenges. What’s more, the development is testament to the time and logistical benefits that come from utilising more modern methods of construction, including offsite, proving once again that this modern form of construction can have widescale benefits if further embraced.