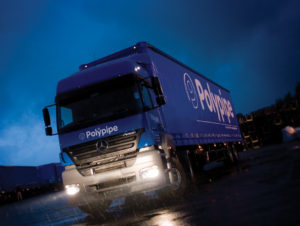 Polypipe, a leading European manufacturer of plastic piping systems for the movement of water and air, is set to join in HM The Queen’s 90th birthday celebrations thanks to the receipt of a prestigious award.

The annual Queen’s Awards for Enterprise reward excellence by businesses in a number of fields, with Polypipe commended for its increased export activity.

Headquartered in Doncaster, the FTSE 250 listed company was recognised by the Queen’s Award team for its work in driving increased sales across the globe, not least in the Middle East, where Polypipe recently solidified several years of growth in the region with the opening of its first overseas Technical Centre in October 2015.

Following the successful take up of Polypipe products and design expertise in a number of the UAE’s most prestigious projects, the company is pursuing further growth in the Middle East while expanding into markets in southern Asia and Africa, as well as continuing growth in continental Europe.

Vince Fenson, Business Development Director at Polypipe, said: “It’s truly an honour to be recognised by HM The Queen and the Queen’s Award team for the excellent work that Polypipe staff have put into increasing our export activity.

“We were keen to grow during the recession and recognised the opportunities that exporting offers. The combination of our sector experience, design expertise, 20,000 strong product line and innate understanding of the needs of our customers means that we’re ideally placed to continue this growth in years to come.”

A large part of Polypipe’s success has come through challenging traditional piping systems, made from materials such as clay, cast iron and concrete. In creating a range of innovative products that perform better than their alternatives, Polypipe systems have been able to provide customers a host of environmental benefits whether dealing with flooding or providing a sustainable source of heat and ventilation.

The Queen’s Award win follows Polypipe’s status as a UK Superbrand and recognised supplier of drainage products to London 2012 by the ODA.