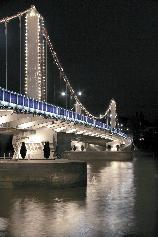 With its distinctive architecture, Chelsea Bridge provides a recognisable landmark for residents and tourists alike. To ensure that one of the district’s key assets is shown to its full potential, the Royal Borough of Kensington and Chelsea were keen to adopt the latest lighting technology. Thus a tailored Philips lighting solution using LEDline2 in combination with Decoflood was installed to enhance the architectural detailing.

The main challenge for the lighting design put forward by Atkins Odlin was to provide sufficient contrast between the upper and lower sections of the bridge thereby reducing the dominant illumination of the arches. This was achieved by giving emphasis to the handrail using a bespoke LEDline module providing a more balanced viewpoint. In all, some 238 modules, 1.2 metres in length were installed by Proctors Electrical in conjunction with the main contractors, Conway. Sealed for life, the IP65 module can be fixed to uneven surfaces by a single universal bracket, ensuring maximum flexibility in mounting and aiming. Thus it provided the versatility to allow the light to underline the balustrade along its entire length. Incorporating a secondary optic to spread the light further, cool white modules were specified to contrast with the warmer tones of light projected on to the suspension cables, arches and the bridge’s twin towers.

Philips Decoflood luminaires were positioned centrally within each arch to complement the balustrade, offering dramatic contrast at the same time. Not only this but only half the number of luminaires, which were formerly used were needed to create the desired effect. To emphasise the cool white ribbon of light running along the bridge railings, warm white MasterColour CDO-TT lamps were used within the archways, which also gave a greater sense of volume and depth to the space.

By using these layered lighting techniques the form and function of Chelsea Bridge has been revealed in all its glory. As Tony Felstead, street lighting engineer for the Royal Borough of Kensington and Chelsea explains: “All the structural elements of the bridge are now highlighted in a more balanced way.

No one feature dominates and the overall effect is much more three dimensional.”

The burners specified by Biemmdue – who also sponsored the Italian bobsleigh team – were Ecoflam Max on/off units. These include the 130kW Max 12, the 190 KW Max 15 and the Max 20 which boasts an output of 237kW.