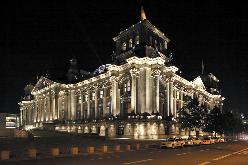 “The illuminated Reichstag will be the principal landmark of the World Cup city of Berlin”, says Robert Pfarrwaller, Managing Director of Philips Lighting in Germany, Austria and Switzerland. “A new tourist highlight will be created for tours of the capital city before or after a match”, he adds.

The idea of illuminating the Reichstag came about in cooperation with Hamburg’s Living City Foundation (Stiftung Lebendige Stadt) and the renowned light artist Michael Batz. It is being put into practice by Philips and the events services company Procon. Philips has made the lighting technology available, while Procon is installing the light art and the Living City Foundation will meet the operating costs. In this way, the illumination of the Reichstag building will be financed entirely with private funds.

“Philips is our preferred technological partner for urban beautification projects”, says Alexander Otto, Chairman of the board of the Living City Foundation. “We have already worked together very successfully on major projects like the illumination of Hamburg’s dockland warehouse district, Hamburg’s Jungfernstieg lakeside promenade, and the Rhine promenades in Cologne.”

City beautification is becoming an increasingly important area of activity for Philips Lighting. Among the international projects undertaken by the company are the illumination of the Eiffel Tower in Paris and the illumination of Regent Square in London.

Leading-edge technology is one of the reasons for Philips’s success in major projects of this kind. The use of different colour temperatures – from warm white (3,000 Kelvin) to cold white (5,000 Kelvin) – for the illumination of the Reichstag will permit a differentiated depiction of the architectural features of a building that symbolises German history. Philips is using luminaires fitted with LED and CDM MASTER Colour lamps with a power rating of nine to a maximum of 70 watts, incorporating high-pressure metal halide discharge lamps and LEDs. Both technologies are not only characterised by high energy efficiency – the lighting costs less than three euros per hour – but also have very good colour rendering properties. Because of the small size of the lighting systems, they can also be used flexibly for the most varied lighting concepts.