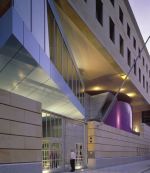 The Government’s first Private Finance Initiative outside the UK involves Johnson Controls looking after all the facilities at the British Embassy in Berlin. The company’s Regional Operations Director in Germany, David Munro, outlines the challenges and how they were overcome.

The British Embassy in Berlin, Germany is the prestigious location for the first Private Finance Initiative (PFI) ever undertaken outside the UK by the British Government. Working with the Foreign and Commonwealth Office (FCO), Johnson Controls was awarded a 30-year contract (beginning in July 2000) for facilities management of the 10,000sq m building, which now houses 125 Embassy staff and eight Johnson Controls employees. The key objective of the agreement is to keep the building in top condition throughout the 30-year duration of the contract while staying within budgeted costs.

The Embassy’s story begins in 1996, when plans for its construction were first mooted. By 1998, the design was complete and it was decided to construct the Embassy using conventional construction methods. However, circumstances changed when funding cuts meant the FCO had no option but to turn the project into a Public Finance Initiative (PFI) contract.

PFIs involve the public and private sectors working together, with private companies taking on the financing and management of major public sector projects, leaving the public sector organisations free to concentrate on their core business. In the case of the Berlin Embassy, this had two particular advantages for the FCO – it had no upfront costs to pay and it was able to pass on the risks associated with constructing and operating the building to those concerned with its construction.

Johnson Controls has been involved with the project from initial planning and consultancy. Before construction started, the company’s representatives met FCO officials to discuss their requirements and ensure the finished building would be future-flexible, comfortable, practical and efficient for the full length of the contract.

The Embassy was finally opened in June 2000. Since that time, Johnson Controls has been responsible for the facilities management for the entire Embassy apart from telephone systems, computer systems and manned security. So it supplied and looks after all the hvac equipment including air conditioning (comprising a chiller, split ac systems and fan coil units), heating and hot water (radiators powered by district heating) and ventilation systems.

Johnson Controls also manages the provision of furniture in the Embassy, as well as technical equipment including CCTV, smoke detection, a sprinkler system and telephone cabling. In addition it is responsible for cost planning and control, purchasing and procurement, maintenance, energy management, catering, cleaning, reprographics, postal services, and portage as well as waste disposal, janitorial and gardening services, events management and even snow and ice clearance.

A series of output-based specifications defined by the FCO form the basis for all the services Johnson Controls offers. Service level standards derived from these specifications set the quality grade of the services to be performed, measured using a series of response and resolution times. Should Johnson Controls fail to solve a problem within the specified resolution time, an escalation system is initiated. If the problem remains unresolved by the end of the time defined by this system, the FCO can reduce its monthly payment to Johnson Controls.

This approach offers the FCO several advantages in that it ensures that, by and large, response and resolution times are adhered to and the FCO knows precisely the maintenance and replacement costs budget because this has been fixed for 30 years from the year 2000. Every element can be carefully costed to take account of predicted replacement schedules, so the risk of equipment failure is reduced and reliability is improved because the integration of the building management and maintenance systems means data on energy usage can be collected and stored, and maintenance can be scheduled to suit the building’s occupancy patterns.

There are only two ways the PFI agreement can be altered. Johnson Controls can make certain changes, but these must be cost-neutral to the client. For example, if chairs need replacing and the company is unable to source the same type, then the replacement must meet the same standard at no extra cost to the FCO. Alternatively if the FCO wants to alter something that was there at the outset of the contract, it must meet the cost. So, for example, if the FCO decides to swap mechanical gates for electrically operated ones, it must pay.

As well as taking on the cost of facilities management at the Embassy, Johnson Controls has also accepted other risks. For instance, if the law changes, the company is responsible for meeting the new demands at no extra cost to the client. However, the appropriate division of financing is not the only criterion for a successful contract.

Crucially, the process also relies on good teamwork, not only within Johnson Controls, but also in how it relates to Embassy staff. Indeed, a team of eight people employed by Johnson Controls works within the Embassy and the FCO looks upon them as part of its staff.

Johnson Controls’ relationship with the Embassy is exceptionally good. In fact, it is so close that the company is able to increase its revenue by renting out parts of the Embassy building for events. A 400sq m events area is available for hire by members of the public for external functions such as receptions and dinners. This enables Johnson Controls to generate extra revenue; the agreement specifies that it pays 25% of its takings to the Embassy so both parties benefit – a classic win-win situation.

Predicting the cost of energy over the 30 years of Johnson Controls’ agreement with the FCO is tricky – over such a long period, it is bound to change. To tackle this, the Johnson Controls team sat down with the FCO managers at the start of the project to calculate how much energy the building consumes each year.

Together, they decided this figure would be set in stone for the next three decades to make it simpler for the FCO to produce budget forecasts. This means the FCO pays a set amount for its energy regardless of how much it actually consumes. As a result, when the Embassy uses more energy, Johnson Controls must pay for the surplus; when it uses less, Johnson Controls benefits financially. This arrangement ensures that responsibility for energy saving is in the right hands – the operator’s rather than the client’s – and this is good for the efficient running of the Embassy.

Johnson Controls also made significant improvements to the building infrastructure and to how it is managed. An intelligent building management system controls the temperature and air conditioning and energy use data is compiled using 19 meters.

On top of this, Johnson Controls’ Metasys building management system – working in conjunction with CAFM (Computer Aided Facilities Management) software – is reducing costs and increasing the flexibility of the Embassy’s operations with an exchange of up-to-date global information on the optimum technical maintenance of hundreds of different products.

All this attention to detail has paid off. Last year, the embassy was awarded the new BREEAM In-Use certificate and earlier this year it received the BREEAM In-Use International Award.