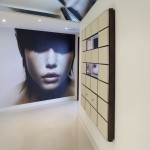 Philips has supplied Yorkshire based GHD, the market leading manufacturer of styling irons, with  an LED lighting solution for their recently opened prestigious offices in the centre of Leeds. The lighting specification was developed by Litetask along with John Sheffield, a director of Bradford based electrical contractors, Southern & Redfern who carried out the installation.

Mark McDonnell of Litetask, explains why Philips iW Cove Powercore LED luminaires were selected to fulfil the client’s brief: “Whilst it was essential that the lighting design had a high visual impact it also had to be energy efficient at the same time. Using Philips LED modules seem to be the ideal choice as they met both of these criteria. Plus the fact that they have a three year guarantee means that you can specify with confidence.”

The wow factor of the lighting design was provided by installing 718 of Philips SSL iW Cove Powercore LED luminaires in the main office and catwalk areas as well as in the entrance lobby. Intelligent white (iW) Cove is an LED luminaire which is ideally suited for alcove applications.

In addition, the luminaires have end to end locking connectors for continuous streams of light which complements the sleek contemporary interior design of the GHD offices.

As the Powercore technology is an integral part of the luminaire this means in essence that the need for an external power supply is eliminated as it has power and data processing within the unit. Creating the variable change of white was achieved via a Mode DMX lighting control system.