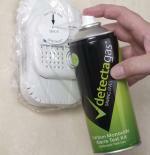 Detectagas has launched a simple new way of testing carbon monoxide detectors which it believes addresses a major flaw in this equipment’s reliability and could literally save thousands of people who may be at risk from carbon monoxide (CO) poisoning.
Available in both a professional version for gas installers and plumbers, and as a domestic kit for householders to carry out their own tests, Detectagas is a specially formulated aerosol which exposes a CO detector sensor to a pulse of calibrated test gas, alerting householders if their carbon monoxide gas detection unit is faulty for a cost of just £1.20 per alarm.
CO detectors have been widely on sale in the UK since 1992 but have been the ongoing subject of industry and government based reports raising doubts about their reliability.
The new Detectagas product is a patented method to test sensors in domestic CO detectors.  It comprises a hood that fits over the device and an aerosol that introduces a measured dose of test gas.  If the alarm fails to sound in three minutes then the sensor has failed and a new alarm is required.