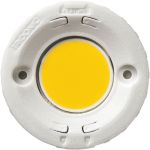 Tridonic has launched the new generation TALEXXengine STARK SLE LED, a sophisticated energy saving system for use with LED downlights and spotlights in general lighting systems.  Compared with previous versions, the new STARK SLE boasts 40% more light output and a longer life of up to 50,000 hours

The latest generation TALEXXengine STARK SLE LED system still consists of a matched LED module and LED converter. LED modules are available in Classic and Select versions with a colour rendering index (CRI) in excess of 80 or 90, and in a Premium version which also has a colour rendering index of more than 90, in addition to more dimming and control capabilities.  The 40% higher light output means more lumens per watt; 145 lm/W in the case of the LED module and up to 115 lm/W in the case of the system.  This results in equivalent brightness with lower energy consumption or greater brightness with equivalent energy consumption.

Depending on the desired operating mode, high efficiency or high output, the user can choose the appropriate TALEXXconverter, which is available as a surface-mounted or recessed version with various interfaces to the control system.