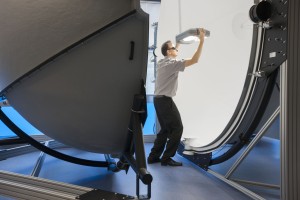 During the last couple of years the advances that have been made in LED lighting technology have opened some very exciting opportunities for using this efficient and long-lived light source more extensively in street and other exterior lighting applications. However, specifiers need to be aware that LEDs are a very different type of light source compared to the more familiar HID (high intensity discharge) light sources. This necessitates the application of a wider range of criteria to their specification.

With traditional HID light sources such as high pressure sodium (SON) there was very little variation between different manufacturers’ lamps. So we could talk generically about, for instance, a 70W SON lamp and we’d all be talking about pretty much the same thing. We would understand how it would perform, the light output we could expect and potential life of the lamps. Manufacturers like ourselves would then design our luminaires to deliver optimum light output ratios (LORs) through the clever use of optical systems.

This situation isn’t quite so clear with LEDs. For example, the power consumption of an LED fitting is no longer a useful indicator of the lumen output. In fact, these can vary considerably so thinking just in terms of lumens and LORs is not helpful when specifying LED lighting. Thinking about ‘useful lumens’ is therefore far more meaningful and more indicative of the lighting performance that can be expected.

One of the key reasons for this is that high power LED light sources are usually used in conjunction with a single lens, so the light sources themselves are inherently directional. When this is combined with luminaires optimised for LEDs the use of lumens can be maximised so that the light is delivered precisely to where it is needed. This can result in an LED luminaire that has a lower lumen output (with a lower electrical load) than another LED luminaire, yet delivers more useful light. Clearly this is an important consideration when aiming for a design that will deliver maximum energy efficiency without compromising on lighting quality.

This also highlights the importance of understanding the interaction between the light source and the luminaire and how this impacts on overall efficiency. There may be a tendency to think that all LED luminaires are efficient because LED sources are inherently efficient compared to traditional light sources. However, the overall efficiency of LED luminaires can vary considerably so this, along with the useful lumens, needs to be taken into account when specifying.

Another issue to consider in relation to overall efficiency is the drive current that is being used. Early LEDs were designed to run with a maximum drive current of 350mA. Broadly speaking, this was close to the optimum efficiency of the LEDs at that time. Above 350mA the efficiency of these early LEDs tailed off significantly (the droop characteristic). In addition, there were concerns about thermal management at higher currents (and still are), combined with a relatively poor understanding of the longevity of LED light sources.

For these reasons, running above the binning current is no longer a matter of ‘over-driving’ the LED. It is simply taking advantage of the characteristic of modern LEDs and using the available capacity of the light source to provide more efficient and cost effective lighting.

However, selection of the drive current needs to be considered in relation to the practical requirements for the lighting, balancing the lighting performance against the life of the light sources. The ‘useful’ life of LED light sources is denoted by the L70, a measurement of light output introduced by the Illuminating Engineering Society (IES). L70 is a measure of how many hours the LED will run and still deliver 70% of its original lumen output. For instance, a light source that emits 1,000 lumens when new and 700 lumens after 50,000 hours has an L70 of 50,000 hours.

Returning to the issue of drive current, driving a modern LED light source at 350mA could achieve an L70 of 240,000 hours. Very impressive but is it practical? This would give a life of 54 years if the lighting was used 12 hours per day, so the light sources would probably outlive the luminaires, and we can certainly expect to see more advances in light source technology in the next 54 years. Furthermore, the light sources would not be delivering optimum performance during this time.

An alternative would be to run the LEDs at 1,000mA to achieve an L70 of around 75,000 hours with a life of 17 years if used for 12 hours per day – during which time the lighting is delivering cost effective performance.

One of the effects of driving the LEDs at higher currents is that more heat is generated, making good thermal management critical in maintaining the performance and longevity of the light sources. The design of the luminaire therefore needs to incorporate an efficient thermal management system to conduct the heat away from the LED chips and ultimately away from the body of the luminaire.  A holistic approach must be taken when designing a thermally efficient luminaire, taking into account the quality of the PCBs, thermal interface materials, airflow, fins etc.

This issue places greater emphasis on the quality of the construction of the luminaires, which can also be combined with innovative designs that address the aesthetic requirements of projects as well as lighting performance. Going down the LED route doesn’t mean the luminaires have to be visually uninteresting.

Looking to the future

One of the characteristics of LED lighting is its rapid development. We are accustomed to new generations of light sources bringing improved performance and efficiency, but with LEDs the evolution times are much shorter. This means that LED luminaires should be easy to upgrade to newer LED sources in the future, so that end users can continue to take advantage of the benefits of LED throughout the life of the installation.

Given the long life of LED lighting, it also makes sense to work with a manufacturer that is likely to be around in the future when the lighting is upgraded. We’ve all seen companies that enter a market to try to make a quick kill with a new technology and then move onto something else.

Underlying all of these points is the importance of dealing with a manufacturer that is able to help address all of these issues, encompassing both the technical issues relating to exterior lighting and the specific criteria that govern LED performance. The fact that LEDs are essentially electronic components has resulted in a number of new entrants to the market that certainly know their ‘electronic onions’ but don’t have a pedigree in lighting. Unlike the majority of electronic equipment, LED exterior lighting has to withstand a rigorous environment that is only fully understood by those companies with experience in designing luminaires for these applications.