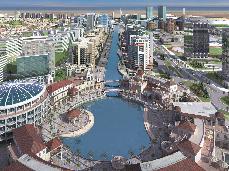 Mott MacDonald has been appointed as the lead consultant for the development of Dubai Sports City’s mixed use canal hubs, one of the main components within the world’s first purpose built sports city.

Working with RTKL architects, Mott MacDonald will be responsible for all architectural, structural, mechanical and electrical engineering for the two mixed use canal hubs located at either end of the feature canal, which forms the centrepiece of the Dubai Sports City development. This will include all foundations, reinforced concrete sub-structures and super-structures plus cladding and facades, plumbing and drainage systems, HVAC, electrical power supplies, lighting, public address systems and building automation systems.

Construction on the canal hubs is expected to begin by the middle of next year and it is anticipated that both retail hubs will be completed in 2008.

Dubai Sports City is being developed by a consortium of leading UAE business men on a 50 million sq ft site of land in two phases. The first phase, which will take two years to complete, involves construction of all infrastructure, including stadiums, a sports-themed mall, world-renowned sports academies and an 18-hole Ernie Els Design championship golf course. The second phase will involve further residential, commercial, retail and public facilities and will be completed over a further two year period.