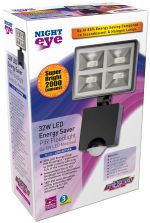 They’ve already stolen a march on the competition with the neat and sleek design of their pioneering Nighteye 8W and 16W LED floodlights. Now Timeguard has added the even-more-powerful 32W model to the range – and it features the same slim line design that made the original members of the Nighteye family an instant hit.

Instantly bright, like halogens, the new 32W model’s output is equivalent to 2000 Lumens (approx. 230W halogen), yet with only 14% of the running costs.

What’s more, one of these floodlights with an integral PIR detector (which has a detection zone of up to 12m)  is powerful enough to switch up to five slave floodlights that are also now available.

With IP55 weatherproof rating, these powerful floodlights are ideal for use outdoors and, because they do not emit as much heat as traditional halogens, the Nighteye family is also finding increasing popularity for use indoors.

Timeguard’s Fast Fix terminal connections and the simple fact that these units weigh so little, makes for easy installation.