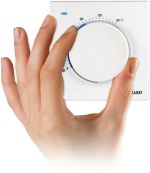 Stephen Payne of Timeguard explains why we need to take a closer look at controls technology in order to make energy savings.

Once the fabric of the building is optimised and any aging equipment replaced, then it’s all down to the controls. An energy audit, whether it is a complete record of every item of equipment throughout a company, or a quick look around their own home will have told people what their starting point is. Smart meters will then tell them how much progress they are making towards their goals – but it is the controls that will create the savings.

Computer-based building management systems are impressive and clearly have a place, especially in new build or as part of a major refurbishment, and we would always recommend sticking to the KNX open system which gives people the freedom to choose and combine compliant devices from a range of manufacturers. Yet for most businesses and homes, it’s the controls that are sold over the wholesaler counter that are the ones that will drive their energy saving campaigns.

You might argue that having dozens of available ON/OFF settings per day and a choice of workday and weekend settings is over the top. After all most of us were perfectly happy with one or two until someone told us we could have a dozen. But that’s technology for you – the microchips are down and the microchips can do all this stuff and more!  There’s not much more that can be added to the technical capability so now it is the way we use it that matters.

A particular bugbear of the Timeguard team is that most microprocessors can also work out when the clocks change for summer and winter, wherever you are in the world and for decades to come, so it’s a bit surprising that anyone would still request time switches that do not have this feature. After all, there’s little point in setting up the timing of someone’s heating or lighting to the nearest minute if they are going to forget to spring forward or fall back when the clocks change (or, more likely, not be able to work out how to do so without disturbing all the other complex programming that has been set up, and so decide to leave well alone.

Making controls easier to use

Getting the best out of controls involves making them easy to use. We hear today about apps that enable people to control systems in their homes over the phone – but the simple fact is that most of us can barely programme a time switch. If a device is going to put people in control of their environment, then they have to be able to use all of its functions easily. We all know the adage about how a washing machine comes with a dozen programmes, but we use only two of them. The danger is that controllers are used in the same way, and the smart control that they offer is just not being taken advantage of.

Last year, the School of Engineering and Design at Brunel University published research which showed that nearly 60% of domestic energy consumption is accounted for by heating consumption and is directly influenced by occupants through the use of their control systems. Yet, Brunel found that controls often do not allow the user to make savings due to the cognitive demands placed on them, therefore creating an unnecessary barrier to reducing heat energy consumption. By designing more inclusive and usable controls, considerable energy savings could be made in the domestic context. Undoubtedly the same would hold true in commercial applications.

So the gauntlet is down – we need to be making controls that people can use – and you need to be specifying them.  All the functionality is there, it’s now mainly a case of listening to market feedback and making them easier to use.

If people can see and understand what is going on, and see whether the status is On or Off, they will trust the controller and not be tempted to alter the programming unnecessarily. If they can programme accurately and easily, they will be able to create a warm, comfortable environment and not need to keep making adjustments. How many times have you seen someone turn up a thermostat to make a room heat up faster, when a simple electronic thermostat would keep the temperature steady and avoid the peaks and troughs that tempt people to tamper?

Timeguard’s Programastat range of digital thermostats meets this challenge head on by offering a simple, direct replacement for old electromechanical thermostats. The complementary range of programmers is easy to set and their clear displays guide people through the setting process.  The wall-mounted thermostats offer a choice of LCD displays and traditional analogue-style dials.

Autumn 2012 will see a new range of compact, slim line time controllers for domestic and commercial use, and once again we have raised the bar for design and ease of use. Certainly the new range is more compact and attractively designed, as befits the trends we are seeing throughout the industry, but this isn’t just a cosmetic smoothing of the edges; because we have invested in a complete redesign and new factory tooling – and all the changes are geared towards genuine ease of use.

The new timers are more compact and attractively designed than their predecessors, and the range includes a choice of analogue and digital control, all with dozens of On/Off settings available per day. In addition, they focus on genuine ease of use in response to trade and end-user feedback.

The digital switches have bigger, clearer screens for easy viewing. Programming is simple and the screen prompts make sense. The Timeguard Boost function that has proved so popular makes a welcome reappearance on these new time controllers, enabling users to call for one or two hours extra heat or light at the press of a button and, importantly,  without altering the regular programming. So too are the usual advance and over-ride functions.

Design innovation on the mechanical models includes an ingenious traffic light slider for giving easy red and green indication of the switch’s status. This is especially useful for older people or ‘technophobes’ who may want the reassurance of the On/Off status.   This may seem obvious, but no-one else has done it and it follows on from the success of the analogue-style dial that features on the front of one of the Programastat electronic thermostats which also has a clear colour-coded visual indicator of status.

At the end of the day, the main reason for using time controllers these days is to save energy, and the smarter we are with the way we use time controllers, the more energy we can save. It is investment in developing new, improved products like these that makes it possible.