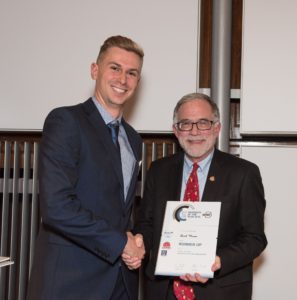 Lochinvar’s Scott Mason has become the first engineer employed by a manufacturer to secure a top three finish in the annual CIBSE ASHRAE Graduate of the Year Awards. Scott (pictured with ASHRAE President Tim Wentz), took third place behind Antoni Sapina Grau of WSP/Parsons Brinkerhoff and Katie Ewing of Atkins in the competition, which involved giving a presentation to a large industry audience at the Institution of Mechanical Engineers (IMechE).

Scott started at boiler and water heater manufacturer Lochinvar as a technical support apprentice in 2009 having left school at the age of 17. The company sponsored him through a three-year advanced apprenticeship, and, impressed by his progress and attitude, put him forward for a Higher National Certificate in Engineering, and on to a Higher National Diploma at Warwick College. This made it possible for Scott to then study for a degree in mechanical engineering at the University of Northampton.

He was able to keep progressing within the company at the same time and, after moving up to internal sales assistant, was appointed UK senior technical sales engineer for integrated renewable solutions earlier this year.

This is an important post, particularly for a young engineer, as it is considered key to the company’s strategy for responding to growing demand for renewable systems and promoting solutions that integrate renewable technologies with traditional heating and hot water products.

Eight finalists were chosen for this year’s award from a large field of international graduate engineers and each was given five minutes to talk on the subject of: ‘Computers and digital technology are transforming the way engineers work. What impact do you think this is having on innovation; professionalism; and traditional skills?’

“The standard of all eight presentations was extremely high, which makes this an even greater achievement for Scott,” said Lochinvar managing director David Pepper. “He has worked very hard and taken advantage of the opportunities offered to him, which is all an employer can ask. Everyone at Lochinvar is delighted for him.

“It is also an important development for the building services engineering sector to recognise rising talent coming through the ranks of manufacturers.”